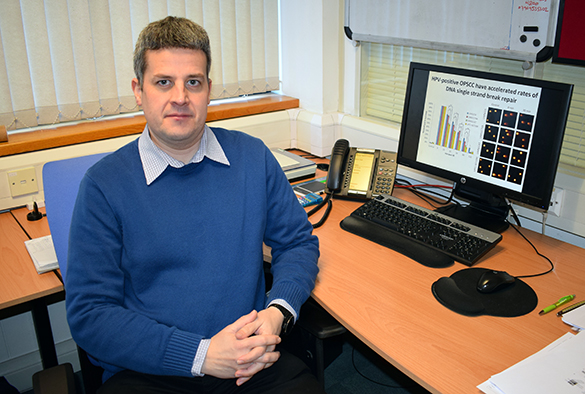 Collaborative research conducted in Liverpool and Oxford, published in The Red Journal, identifies the specific cellular process that helps cells damaged as a result of proton beam therapy, repair themselves.

Proton beam therapy (PBT) is a type of radiation treatment that uses protons to treat cancer. A proton is a positively charged particle and a machine called a synchrotron or cyclotron speeds up the protons. The protons’ speed determines the energy level, and high energy protons travel deeper in the body than low energy ones.

The key advantage of PBT is that it can deliver the radiation dose specifically to the tumour, and limits damage to normal, healthy tissue.

Low energy protons, in comparison to high energy protons, introduce increased levels of damage to the DNA that is in close proximity (called complex DNA damage) which persists in cells and contributes significantly to the cell killing effects of PBT. The precise mechanism of how the DNA in the targeted cancer cell repairs itself has been until recently unknown.

Researchers from the University of Liverpool and Cancer Research UK / Medical Research Council Oxford Institute for Radiation Oncology conducted a study to identify the specific process that allows irradiated cancer cells following PBT to repair themselves.

The research, led by Dr Jason Parsons from the University of Liverpool’s Institute of Translational Medicine, treated a number of different cancer cells to both high energy and low energy protons and measured the levels of complex DNA damage and how the cancer cells initiate their repair which correlates to their survival.

Part of the research was carried out at The Clatterbridge Cancer Centre’s National Eye Proton Therapy Centre, home to the UK’s only proton therapy beam.

Dr Parsons, said: “With the increasing use of PBT in the UK for cancer treatment, stimulated by the UK Government’s £250 million investment in PBT Centres in Manchester and London that will be operational from this year and 2020, respectively, our work has revealed new details on the radiobiology of protons at the molecular and cellular level.

“Using currently the only clinically operating proton beam therapy facility at The Clatterbridge Cancer Centre in Wirral, our research shows that protons at different energies display distinct effects on DNA which have a major impact on their efficiency in causing cancer cell killing.

Andrzej Kacperek Consultant Proton Physicist at The Clatterbridge Cancer Centre, said: “This is an important milestone in our understanding of proton beam therapy in the UK and abroad, and will help to guide further research in the near future, and hopefully identify ways of making PBT more efficient and effective for cancer therapy.

“Providing the technology for this research illustrates the importance of a collaborative approach in developing cancer treatment.”

The research was funded by grants from North West Cancer Research and by the Medical Research Council.