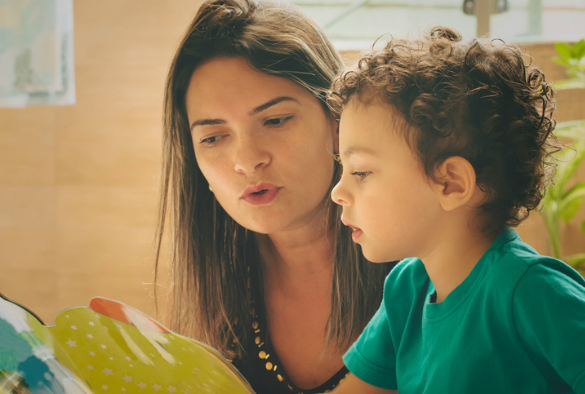 Researchers have made a major breakthrough in the assessment of language development among bilingual families and in the identification of those children who require extra support to improve their language skills.

During a three-year study involving nine UK universities, including the University of Liverpool, academics interviewed almost 400 families with two-year-old children learning English and another of 13 common additional languages.

They were able to demonstrate for the first time that those learning English and a phonetically or grammatically close language (such as Dutch or German) knew more words in their other language than those learning more distant languages such as Mandarin or Greek.

The team used the findings to create and test the first toolkit for health professionals to accurately assess how bilingual children’s language skills are developing.

Led by the University of Plymouth, the research was funded by the Economic and Social Research Council (ESRC) as part of a collaboration including the universities of Bangor, Birmingham, Kent, Liverpool, and Oxford. Academics at Coventry, East Anglia and Essex were also involved.

With figures suggesting that almost 20% of children of school age in the UK are bilingual, its findings could have major implications for young people’s personal and professional prospects, as well as national health and education systems.

Professor Caroline Rowland, Director of the Language Development Department at the MPI for Psycho linguistics at the University of Liverpool, and co-Director of the ESRC LuCiD Centre, said: “This work couldn’t come at a better time. The Department for Education has just published its national plan to improve social mobility in young people; at the heart of their strategy is the ambition to close the language gap that develops between the most and the least disadvantaged children in our society. This new study, and associated resources, will provide practitioners, parents and researchers with an invaluable resource in the crucial work that they are doing to improve the life chances of young children in the UK.”

The project leader Dr Caroline Floccia, Associate Professor (Reader) in Psychology at the University of Plymouth and Head of the Plymouth Babylab, said: “Language is a foundation for harmonious development in a child and being bilingual is now a norm across the world. In the majority of cases, their development in each language is slightly delayed compared to that of monolingual children, which can have knock-on effects both for them and (when they get to school) their peers. We are proposing the first practical solution to the problems faced by bilingual children, because the earlier we identify and tackle these potential issues, the more likely a positive outcome for the children and their prospects.”

Currently, all two-year-olds are required to have a health assessment to monitor their development, and the researchers hope their UK Bilingual Toddler Assessment Toolkit (UKBTAT) can become a standard component in that assessment. It can also be used by a wide range of health practitioners, including speech and language therapists, social workers, educational psychologists, and GPs.

It also features a Language Exposure Questionnaire (LEQ) that a health practitioner can complete with the help of the parents. The LEQ assesses the proportion of time the child spends engaged in an English-speaking setting compared with their additional language.

These answers are processed through the toolkit’s statistical model to produce a result which shows where the child is situated in terms of the average level of proficiency across the UK. This will allow practitioners to identify bilingual toddlers who may need additional support with their language development, not possible until now.

Professor Kim Plunkett, Professor of Cognitive Science at the University of Oxford, and a collaborator on the project, said: “Tapping into a parent’s knowledge of their own child’s development has become an invaluable component in the developmental psychologist’s assessment toolkit in recent years. This research extends the method into the realm of bilingual development and provides parents and practitioners with invaluable assessment tools (UKBTAT and LEQ) that are easy to use and capable of identifying potential language delays in bilingual two-year olds. The work also provides researchers in the field of bilingual development with important new insights into the development of the bilingual mind.”

The full study ‘Vocabulary of 2-Year-Olds Learning English and an Additional Language: Norms and Effects of Linguistic Distance‘ is published in Monographs of the Society for Research in Child Development.