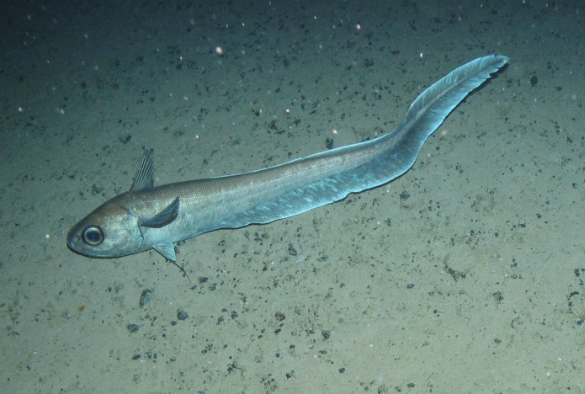 Scientists have found evidence of natural selection in a deep-sea fish species adapting to the depth of ocean that it inhabits.

A team of researchers from Durham University, the University of Liverpool’s Centre for Genomic Research and Marine Scotland studied a species of fish called the roundnose grenadier.

Their findings, which are published in Nature Ecology & Evolution, provide a uniquely clear example of how different specialists within the same species, in this case adaption to life at different habitat depths, can be maintained even within the same geographic population.

The roundnose grenadier has a remarkably broad habitat range in the deep sea, from 180m to 2,600m in depth. The researchers looked at a section of ocean inhabited by this species running from 750m to 1,800m at a single location, crossing the boundary between the ‘light’ and ‘dark’ parts of the ocean.

They sequenced the entire nuclear genome of the species and identified all of the genes that code for biological functions. They then sequenced 60 more genomes – 15 each from fish found at four different depths (750m, 1,000m, 1,500m and 1,800m).

The sequence data revealed adaptation to depth at functional genes, with all of the 1,800m fish different from the ones found at shallower depths.

This gene adaptation was associated with the building of different body forms and functions as the individual matures. Furthermore, the researchers found strong evidence for ongoing natural selection such that either extreme form was favoured at the expense of the intermediate type.

This ‘disruptive’ selection can lead to the evolution of new species when the different types also mate preferentially with their own type. However, in this case there was no clear evidence for mating with one’s own type. Instead, the young (‘fry’) fish stay at approximately 1,000m until they mature and then segregate to different depths according to their genetic makeup.

Lead author, Professor Rus Hoelzel, from Durham University’s, Department of Biosciences, said: “The oceans represent vast expanses across which there are few obvious barriers to movement.

“As in the environment above the sea, we tend to think about movement in a horizontal dimension, across the breadth of the oceans, but at sea there are perhaps even greater habitat boundaries and gradients as species move vertically with depth.

“Our research shows that these fish have adapted to life at different depths, and that they segregate by depth as they mature, based on their genetic makeup.”

Head of Data Production for CGR, Dr John Kenny said “It is great to be involved in such an interesting project that tackles a fundamental evolutionary question. In particular we were able to apply multiple cutting edge sequencing technologies and associated informatics capabilities to such a challenging genome.”

The research was funded by the Natural Environment Research Council (NERC).