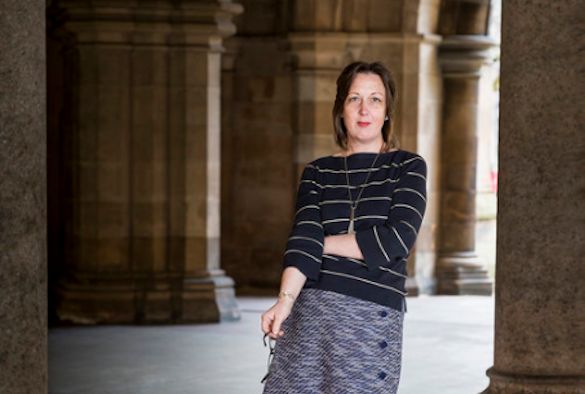 In the next lecture of the Science and Society Series, Professor Sheila Rowan, Director of the Institute for Gravitational Research at the University of Glasgow, will discuss the nature of gravitational waves, the astrophysical events that can produce them and the technology of gravitational wave observatories.

The lecture will also discuss the recent results in this new field leading to the award of the Nobel Prize in Physics in 2017 for the detection of gravitational waves: turning on the soundtrack to the Universe.

The last two years have seen our ability to study our Universe change forever. For the first time we have been able to not only see the stars in the heavens, but to feel the very vibrations of the fabric of space-time produced when stars collide. In February 2016 the scientists of the international LIGO and Virgo collaborations announced the first detection of gravitational waves – tiny gravitational fluctuations sensed using instruments here on the Earth, but produced around 1.3 billion years ago far out in the cosmos when two dead stars – in this case ‘black-holes’ spiralled in and merged. The existence of such gravitational waves was first predicted by Einstein as part of his
‘General Theory of Relativity’ in 1916.

In the decades between then and now, searches for such signals have been the focus of scientists around the globe, including key work here in the UK.

Professor Sheila Rowan is Director of the Institute for Gravitational Research, University of Glasgow, a position she has held since 2009. She received an MBE in 2011.

Sheila’s research is targeted at developing optical materials for use in gravitational wave detectors. Her work formed part of the “Advanced LIGO” detector upgrades, carried out between 2010 and 2015, that contributed to one of the most significant scientific breakthroughs of this century: the first detection of gravitational waves announced in  February 2016.

This resulted in a share of the 2016 Special Breakthrough Prize in Fundamental Physics for her and the members of her team in Glasgow. Professor Rowan was appointed Chief Scientific Adviser for Scotland in June 2016.

The event takes place on 5.30pm – 7pm, Tuesday, 24 April at the Leggate Theatre, Victoria Gallery & Museum. Admission is free but places must be booked in advance by visiting the events website: https://www.liverpool.ac.uk/events/event/?eventid=87600