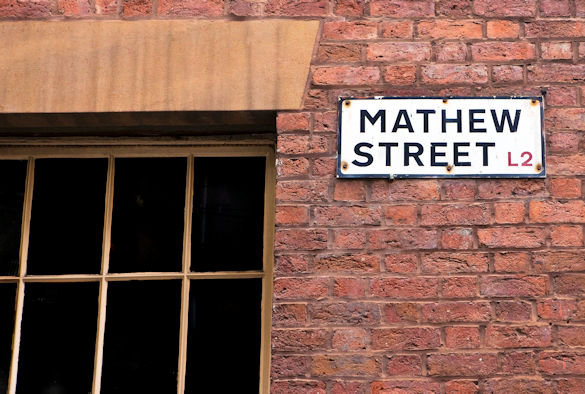 Today (Friday, 20 April 2018) Liverpool City Council are set to approve plans to improve the iconic Mathew Street and the Cavern Quarter in a bid to grow Beatles tourism in Liverpool.

Dr Mike Jones is from the University’s Department of Music:

The Liverpool Mayor, Joe Anderson’s plans to formulate clear and progressive course of action for Mathew Street is to be welcomed. It is ironic that the street should represent a clash of two worlds today, exactly as it did when it opened 61 years ago.

When Alan Sytner opened the Cavern in January 1957 he modelled it on a Parisian cellar jazz club he had visited the previous summer. In those days, Mathew Street was home to a number of warehouses that serviced St. John’s Market, Liverpool’s main fruit and vegetable market on Queen’s Square – sort of the Covent Garden of Liverpool. So it was that the popular music of the day needed to compete with a working and fairly inhospitable environment.

Paul McCartney first played with John Lennon’s group The Quarrymen at the Cavern in early 1958. If we ‘fast-forward’ six decades, the street has retained its Beatles associations, but that Beatles legacy now has to contend with a newly-inhospitable environment – bar culture, all-day drinking and Liverpool as a destination for Hen Nights and Stag Parties.

The particular and peculiar knot that Joe Anderson’s proposed strategy has to unravel is that Mathew Street is a magnet for two types of tourists, those who come for bar-hopping and those who come for Beatles heritage. Certainly, under current conditions the two cohorts cannot co-exist. This point has been made to the council by both the Beatles Industry Group (the representative body of all Beatles-related tourist businesses in the city) and the Beatles Legacy Group (the ‘think-tank’ appointed by Joe Anderson following the publication of the report into the value of the Beatles to Liverpool’s economy) and it is good to see the Mayor committing the council to a concerted effort to give Mathew Street the sensitive coherence it needs. The questions then are, firstly, what would ‘sensitive coherence’ consist of and, secondly, how can the city council persuade private business to co-operate with a plan to secure the street as a site for Beatles tourism?

In any battle for ‘hearts and minds’ what normally swings the argument is to appeal to the self-interest of the stakeholders. Where Mathew Street’s bar-owners are concerned, supporting a (high quality and imaginative) set of Beatles- and Liverpool-centric initiatives will secure the street as a Beatles tourist attraction. A switch away from binge-drinking to food and culture provision (live music has been ‘squeezed out’ of the street from the Cavern down to the Whitechapel) will re-designate the space as attractive to families. Similarly, the re-development of the Cavern Quarter shops and approaches will bring a new vibrancy to the area – especially is better lighting and street art feature in that re-development.

Overall, the strategy offers the city a chance to come to terms with what it means to be the ‘Cradle of the Beatles’; in celebrating the Beatles Liverpool should celebrate what it contributed to their success – imagination, wit and an indomitable character. The emergent Beatles last played the Cavern 55 years ago, but what they embodied is still alive today. The message of Mathew Street is that heritage is about creativity and contemporary relevance, a spirit that is a long way removed from the street’s current offer of spirits always at ‘Happy Hour’ prices.

To learn more about Liverpool’s relationship with The Beatles listen to Dr Jones’ podcast which can be found here.