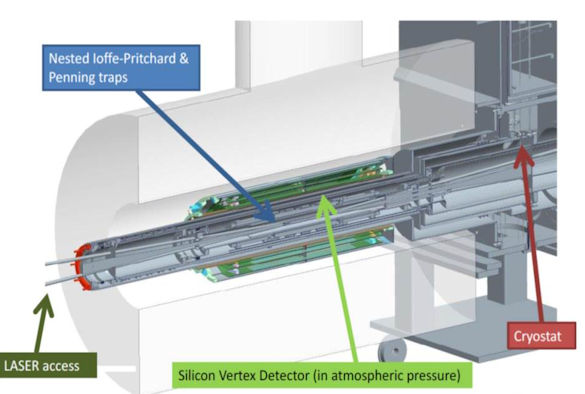 Cut-through of ALHA’s neutral atom trap. The Liverpool build Silicon Vertex Detector surrounds the central experiment, where the antihydrogen atoms are produced and stored, and monitors the antiatom annihilations

CERN’s ALPHA collaboration, which involves physicists from the University of Liverpool, has reported the most precise measurement of antimatter ever made, revealing the spectral structure of the antihydrogen atom in unprecedented colour.

The result, published in Nature, is the culmination of three decades of research and development at CERN, and opens a completely new era of high-precision tests between matter and antimatter.

The humble hydrogen atom, comprising a single electron orbiting a single proton, is a giant in fundamental physics, underpinning the modern atomic picture. Its spectrum is characterised by well-known spectral lines at certain wavelengths, corresponding to the emission of photons of a certain frequency or colour when electrons jump between different orbits. Measurements of the hydrogen spectrum agree with theoretical predictions at the level of a few parts in a quadrillion (10^15) — a stunning achievement which antimatter researchers have long sought to match for antihydrogen.

Comparing such measurements with those of antihydrogen atoms, which comprise an antiproton orbited by a positron, tests a fundamental symmetry called charge-parity-time (CPT) invariance. Finding any slight difference between the two would rock the foundation of the Standard Model of particle physics and perhaps shed light on why the universe is made up almost entirely of matter, even though equal amounts of antimatter should have been created in the Big Bang.

Until now, however, it has been all but impossible to produce and trap sufficient numbers of delicate antihydrogen atoms, and to acquire the necessary optical interrogation technology, to make serious antihydrogen spectroscopy possible.

The ALPHA team makes antihydrogen atoms by taking antiprotons from CERN’s Antiproton Decelerator (AD) and binding them with positrons from a sodium-22 source. Next it confines the resulting antihydrogen atoms in a magnetic trap, which prevents them from coming into contact with matter and annihilating. Laser light is then shone onto the trapped antihydrogen atoms, their response measured and finally compared with that of hydrogen.

Researchers from the University’s Department of Physics designed and fabricated one of the main tools in the ALPHA experiment, the silicon vertex detector. The detector is able to ‘see’ inside the ALPHA –apparatus and it detected where and when single annihilation events took place.

Professor Paul Nolan,  the principal investigator in Liverpool-ALPHA, said: “This result paves the way for even more precise study of the matter – antimatter -imbalance in the Universe. This is a unique technique of comparing the first element in the antiperiodic table with its counterpart, hydrogen, to see if there are any differences between them.”

Dr Petteri Pusa, who is leading Liverpool’s ALPHA operations at CERN, said: “Recent huge developments in the ALPHA –apparatus have made this possible; when we first demonstrated that we can capture and confine neutral antihydrogen atoms at 2010, we captured 38 of them during the whole year’s beam time. Now, we can do the same in ten minutes.”

Professor Carsten Welsch, Head of the University’s Department of Physics, said: “Congratulations to the whole team behind this breakthrough! A fantastic achievement which would not have been possible without the Liverpool detector which forms the heart of the ALPHA experiment. The precision now reached opens entirely new ways to understand physics better.”

The latest result from ALPHA takes antihydrogen spectroscopy to the next level, using not just one but several detuned laser frequencies, with slightly lower and higher frequencies than the 1S–2S transition frequency in hydrogen. This allowed the team to measure the spectral shape, or spread in colours, of the 1S–2S antihydrogen transition and get a more precise measurement of its frequency. The shape matches that expected for hydrogen extremely well, and ALPHA was able to determine the 1S–2S antihydrogen transition frequency to a precision of a couple of parts in a trillion—a factor of 100 better than the 2016 measurement.