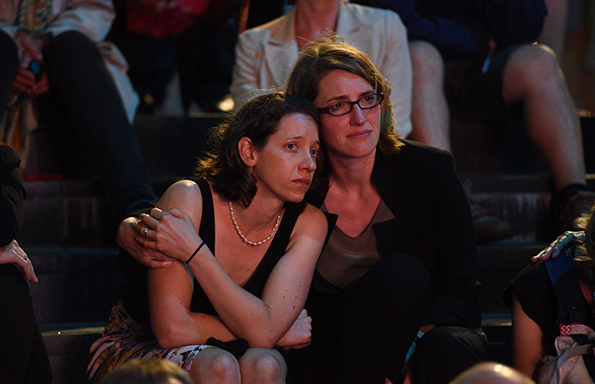 Members of the public react during a ceremony to commemorate the first anniversary of the Lindt Cafe siege at Martin Place in Sydney, Australia, 15 December 2015. EPA/MICK TSIKAS

Lone attackers who use guns, knives or vehicles to inflict mass casualties are of increasing concern to governments, police and security forces. In Canada’s deadliest mass killing in decades, 25-year-old Alek Minassian allegedly drove a van at pedestrians in Toronto on April 23. He’s been charged with 10 counts of first-degree murder and 13 counts of attempted murder.

In January 2017, James Gargasoulas allegedly deliberately drove his car at pedestrians on one of the busiest streets in Melbourne, Australia, killing six people and injuring many more. In December of the same year, Saeed Noorie allegedly deliberately drove his van at pedestrians outside Melbourne’s busy Flinders Street Station, injuring 18 people, one of whom subsequently died. In February 2018, the government of Australia’s Victoria state announced the establishment of a A$31.6-million centre designed to help identify high-risk individuals in order to prevent and combat lone actor attacks. Similar centres exist in the United Kingdom and the Netherlands.

While lone actor attackers are motivated by various grievances, revelations about Minassian’s online life point to what is emerging as a common theme in the biographies of many of these men: hostility toward and/or a history of violence against women. Eight of the 10 killed in the Toronto attack were women.

Research from the United States, the site of so many mass shootings by lone men, is particularly helpful in illuminating the connection between hostility toward and violence against women and such mass casualty attacks. This work shows that more than 50 percent of the mass shootings in that country between 2009 and 2016 were preceded by the murder of an intimate partner or expartner, or a family member.

Research on “lone wolf terrorists” in the United States further illuminates the gender dimension of lone actor attacks. The criminologists Mark Hamm and Ramón Spaaij link lone wolf terrorists with “a warrior subculture that fuses violence and politics with masculinity.” Many of their case studies capture the way that the desire to commit violence against women can become fused with more generalized homicidal intent. For example, two years before Richard Poplawski killed and wounded six Pittsburgh police officers in 2009, he broadcast his violent fantasies on pirate radio, stating: “I want to kill my ex-girlfriend, her mother, her pets, my father, people I don’t like, and in a random measure a couple of members of the Pittsburgh police.”

Evidence of violence against women is present in the backgrounds of a number of lone actor attackers in a host of Western countries. Those with known histories of violence against women include Man Monis, who carried out a siege in Sydney in 2014 that resulted in the death of two hostages; Omar Mateen, who attacked a nightclub in Florida in 2016, killing 49 people; Khalid Masood, who stabbed people near Parliament in London in 2017; and Mohamed Lahouaiej-Bouhlel, who killed more than 80 people by deliberately driving a truck into them in Nice, France in 2016. In addition, Tamerlan Tsarnaev — who committed the 2013 Boston Marathon bombing, killing three people and injuring hundreds of others, along with his younger brother had been arrested for assaulting his then girlfriend in 2009.

If being denied sex was part of the background to deadly actions for the alleged Toronto attacker, it wouldn’t be the only time that rage at such denial has been the trigger for a spree of horrifying violence. In 2009, the neo-Nazi Keith Luke killed a woman who had rebuffed his sexual advances, after first raping and shooting the woman’s sister. He left the scene and killed a 72-year-old man on the street, before winding up in a shootout with police. He later told them he had planned to carry on his rampage at a synagogue.

It is vitally important that we try to understand what motivates lone attackers in order to attempt to prevent and combat future such attacks. Police, security services, government, the media and scholars need to better understand the connections between mass casualty attacks and hostility toward and violence against women. Too often violence against women is misunderstood, minimized or overlooked in the biographies of lone attackers; such men are often understood as men “who turned violent,” rather than violent men whose violence escalated to include strangers.

Hamm and Spaaij describe Keith Luke’s advances toward the woman he subsequently killed as “romantic.” It seems highly unlikely, given the aftermath, that the rebuffed advances were anything other than ugly, coercive, entitled and intimidating demands for sex. The failure to understand violence against women as real violence is tragically apparent in the case of the 2014 Lindt Café siege in Sydney, where two hostages were killed after a lengthy standoff with police. At the time of the siege the gunman, Man Monis, was on bail for 40 sexual assaults against seven victims and for being an accessory to the brutal murder of his ex-wife. In the inquest that followed, the lead police negotiator stated that he believed the sex crimes were “passive” and thus not an indication of a propensity for violence. A psychiatrist providing advice to the police managing the siege repeatedly described Monis’s sexual assaults as “acts of seduction.” The minimization of violence against women and its categorization as essentially nonviolent, in that case, meant that the threat Monis posed to the hostages was not fully appreciated by police.

Better understanding the nature, extent and significance of violence against women and its connection to lone actor attacks won’t prevent all such attacks. These attackers have diverse biographies, and there are typically multiple motivators and factors that lead to attacks. However, the continued failure to recognize the connection between violence against women and violence of a more public nature, such as terrorism and other types of lone actor attacks, will undoubtedly undermine efforts to prevent and combat such attacks.