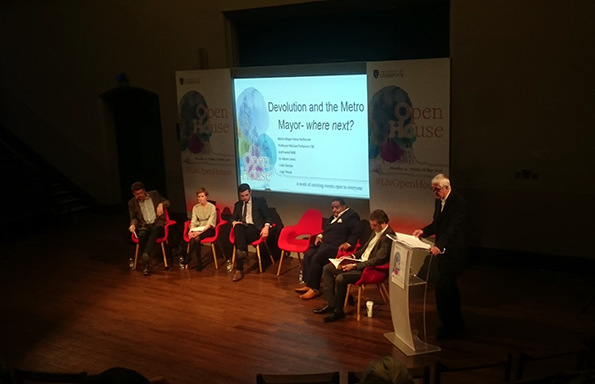 Speaking as part of a panel considering Devolution and the Metro Mayor – where next? the former Walton MP said he was committed to driving the region forward and, that when the populations of Greater Manchester and Liverpool City Region (LCR) are combined they come close to London in size.

Steve Rotheram said: “We live in the most centralised economy in the western world, and we also have the most geographically unbalanced economy in Europe.

“These two things are linked.”

The panel debate was chaired by Professor Michael Parkinson, urban and regional policy expert and the University’s Pro-Vice-Chancellor for Civic Engagement.

Asif Hamid said when he arrived in Merseyside as a business person in 1999, “it was a shambles”, and “he didn’t know where to go, or what to do”.

He said the region now has a “figurehead” and urged people to “get behind the devolution deal”.

Dr Aileen Jones said she believes “devolution is fundamentally a good thing” that has to be “a more effective and responsive form of government for the LCR”, while Colin Sinclair said success will come from building on Liverpool’s “global brand”.

Liam Thorp, who appraised the LCR Mayor role 12 months on in the Liverpool ECHO at the weekend, said he felt there remained “confusion” among the population.

“There’s still a fair amount of confusion on the ground about what the role entails.”

Referring to City of Liverpool Mayor, Joe Anderson, Liam Thorp said: “There was an established figurehead there already and I think people still see that as the case.”

Defending his first year in office, Steve Rotheram lauded LCR’s success in securing multimillion pound investment to eradicate homelessness and a £5m pilot scheme to support the long-term unemployed back to work.

A significant amount of time was spent establishing his office and team, in sharp contrast to Andy Burnham’s inheritance in Greater Manchester.

Steve Rotheram said: “We haven’t had 30 years of collaboration between six districts.

“Until recently, we were still battling each other to try and get deals over the line.”

He said he and his team were “not going to be able to do everything” but “have already taken “huge strides”.

The LCR Mayor added: “In ten years’ time, when people look back, they will know what devolution and the metro mayor is all about.”

Open House is a five day festival of talks, performances, exhibitions and interactive experiences organised by the University of Liverpool, showcasing great ideas, knowledge and culture. To find out more, please visit www.liverpool.ac.uk/openhouse.events