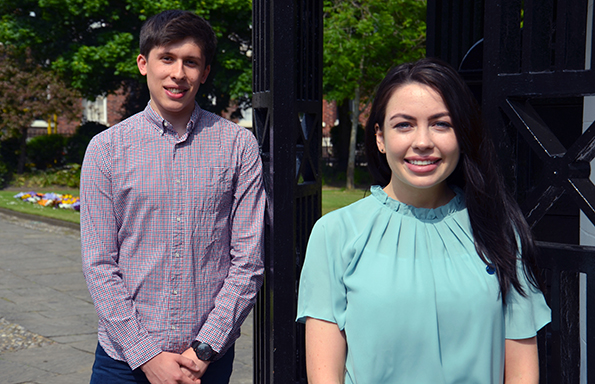 Two University of Liverpool students will take up highly sought-after Washington Ireland Program (WIP) internships this summer, after being selected ahead of more than 500 applicants from across Ireland and the United Kingdom.

Asa Mallon, a second year Politics with Law student; and Róisín Carroll, enrolled on the MSc. Forensic and Investigative Psychology, are two of just 30 successful candidates.

Asa will be working in the Capitol Hill office of former Republican Presidential candidate, Senator John McCain, while Róisín will be based at the National Juvenile Defender Center in Washington DC.

Asa said: “I am thrilled to be selected for such a prestigious program and can’t wait to see how this experience will shape my personal and professional outlook.

“I am incredibly excited to be working in the office of Senator John McCain this summer.

“Senator McCain has been a political figurehead for decades and I am honoured to be given this amazing opportunity to work for a politician of such high standing.”

Róisín said: “I am humbled by the opportunity to join such an impressive group of young people.

“Throughout the experience I hope to develop strong leadership skills that will better enable me to advocate for the rights of marginalised members of Irish society.”

WIP was set up in 1995 to inspire, prepare and support the next generation of leaders of post-conflict Ireland to face the challenges of the future. The University of Liverpool is the only partner outside Ireland involved in the initiative.

The culmination of the six month programme of personal and professional development is an eight-week work placement at a congressional office, government department, business or media corporation in either Washington DC or New York.

Previous Liverpool students have completed placements in the Lombardi Cancer Center at Georgetown University, the School of International Service at American University, the US Holocaust Museum and the Northern Ireland Bureau.

Professor Frank Shovlin, Head of Department of the Institute of Irish Studies, said: “I’m delighted that Asa Mallon and Róisín Carroll have been successful in getting places in this year’s prestigious WIP.

“It is an amazing opportunity and will give Asa and Róisín unique skills for their future chosen career.

“The Institute is very proud that this is the eighth year running that the University has been successful in getting students a place on the programme.”

Bryan Patten, WIP’s Executive Director, says “Asa and Róisín represent the talented students from Ireland and Northern Ireland who are studying in Liverpool.

“Both are very accomplished, have a track record of community service and have demonstrated their capacity for leading in their communities.

“As the selection of each student represents a $15,000 investment on WIP’s part, we take the recruitment of students very seriously and we are delighted to be working closely with the University of Liverpool in identifying young leaders like Asa and Róisín.”

The Washington Ireland Program is supported by the United States State Department, the Department of Education and Science in Ireland and the Office of the First Minister and Deputy First Minister in Northern Ireland. To track Asa and Róisín’s progress this summer, follow the WIP blog at  http://wiprogram.org/