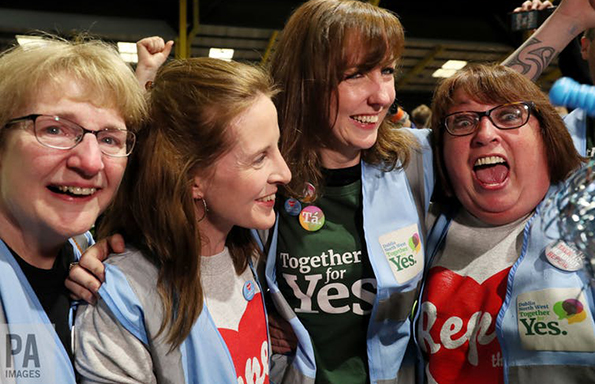 In a historic referendum, the Irish people have voted by a landslide to repeal the 8th amendment to the country’s constitution, allowing the government to legislate for abortion. The vote illustrates the monumental shift in attitudes towards women’s rights in Ireland. It’s also testament to the power of a grassroots mobilised campaign which enabled women to share 35 years worth of experiences of pregnancy under the 8th amendment.

High-profile cases such as that of Savita Halappanavar and Amanda Mellet resonated with the public conscience and the telling of thousands of everyday stories illustrated how many women have been affected by the 8th amendment. Groups such as Termination for Medical Reasons spoke of having to travel abroad to end pregnancies with foetal anomalies. Projects including In her Shoes and Not at Home have published stories of abortion travel and buying abortion pills to end pregnancies alone without support or aftercare. In our research (led by Dr Fiona Bloomer of Ulster University) on abortion as a workplace issue, women spoke of the silence and stigma surrounding abortion. They revealed the costs involved in having to travel, being able to afford or get leave from work, worries about confidentiality and access to follow-up treatment.

Exit polls also asked people about their reason for voting Yes. They revealed “women’s right to choose” as the top influencing factor for voters followed by “risk to health or life”. This is indicative of a wider shift in attitudes towards women, the impact of the 8th amendment on all pregnancies, and the recognition that women can be trusted to make decisions about their pregnancy.

What now for Northern Ireland?

One of the most heartening things to witness in this campaign was the north-south solidarity on the island. Alliance for Choice (Northern Ireland’s key grassroots activist group campaigning for abortion rights in the region) regularly campaigned for a Yes vote in the Irish counties bordering Northern Ireland. But what now for Northern Ireland?

As with the 2015 same-sex marriage referendum, Northern Ireland will again be left behind on abortion rights. There, approximately 1,000 women travel to England each year to have an abortion or buy abortion pills online. The situation is untenable.
A UN inquiry into Northern Ireland’s abortion laws recently found them to be a grave and systematic violation of women’s rights. Opinion polls consistently show strong appetite for change. The UK government allows Northern Irish women to access abortion freely on the NHS in Britain but appears unwilling to intervene directly by legislating to enable them to access care in Northern Ireland.

The final sentence of the British 1967 Abortion Act states that “This Act does not apply to Northern Ireland”. It’s vital that now, the solidarity witnessed on the island of Ireland is also extended to women in the north, by those in England, Scotland and Wales.