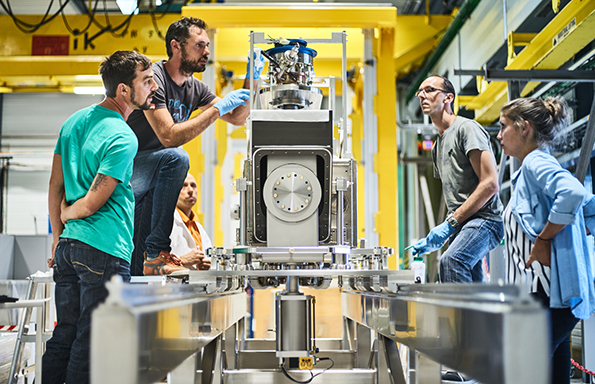 University of Liverpool scientists were part of the CERN team that delivered another huge breakthrough to further revolutionise the particle physics world and mark another step on the path to unlocking the secrets of the universe.

The team, made up of experts from across the world, successfully tested a new technology called ‘crab cavities’ and rotated a beam of protons for the first time. The tests took place on 23 May using a beam from CERN’s Super Proton Synchrotron (SPS) accelerator in Switzerland, and showed that bunches of protons could be tilted using these superconducting transverse radio-frequency cavities.

The tests lasted more than five hours and were carried out at an operating temperature of 4.2K, with a single proton bunch accelerated first to 26 GeV and containing between 20 and 80 billion protons, almost the intensity of the LHC bunches.

The crab cavities were powered to about 10% of their nominal voltage in these first tests. The “crabbing” was registered using a special monitor to observe the tilt along the length of the bunch.

Dr Lee Carver, a Research Associate with the University’s QUASAR Group, in the Department of Physics, contributed to the successful crab cavities tests.

These cavities are a key component of the High-Luminosity Large Hadron Collider (HL-LHC), the future upgrade of the LHC.

Professor Carsten Welsch, Head of the University’s Department of Physics, said: “These fantastic results will help make the LHC an even better accelerator in the future.

“It was made possible by close collaboration between UK institutions contributing to the High Luminosity upgrade and CERN.”

The Crab-Cavity technology revolutionises the world of high energy particle physics as the implementation of crab-cavities is critical to the delivery of the next level of energy and luminosity of the LHC, paving the way to increasing our understanding of the Higgs Boson(s) and ultimately the fundamental Universe.

The UK has led the world in the development and construction of this technology and is working hard to make HL-LHC a reality.

STFC’s Executive Director of Programmes Professor Grahame Blair said: “This is a fantastic result for CERN and for all the collaborators involved.

“I am particularly happy that UK university teams, working with staff at STFC national laboratories and with the international community, have made such a key contribution.

“This demonstrates the value of our world class university-based programme in accelerator physics working alongside our detector and analysis teams in mapping out fully the structure of nature at the LHC energy scale; every bit of luminosity will count in this endeavour.”

The HL-LHC, which will be commissioned after 2025, will increase the luminosity of the LHC by a factor of five to ten.

This will allow researchers to observe rare processes that occur beyond the LHC’s present sensitivity level. Physicists will also be able to perform precise studies of the new particles observed at the LHC, such as the Higgs boson.

The newly developed crab cavities will play an important role to increase the luminosity.

The UK is one of the main partners in HL-LHC with University of Manchester leading the UK collaboration HLLHC-UK alongside Lancaster University as project manager of this UK contribution and key contributor to the original design of crab cavities.