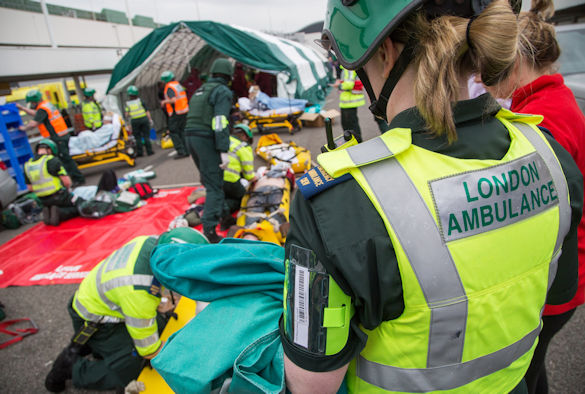 This month a research team from the University was providing evaluation and support to a multi-agency exercise, codenamed ‘Operation Raptor’ at the second busiest airport in the world, Heathrow airport.

Raptor, carried out over two days, involved more than 1200 people, including the research team from the University’s Psychological Science’s department, police, fire and ambulance services, as well as staff from Heathrow Airport Ltd, and a large number of individuals paying the role of ‘casualties’. Although not being carried out in response to any specific threat or intelligence, the exercise played out in the decommissioned Terminal 1 building at Heathrow, was reopened by Heathrow to allow emergency services to run the event.

Decommissioned terminals like Terminal 1 are extremely rare and provide a unique environment to test out responses to incidents in a real setting, whilst allowing for control and exercise evaluation.

The live exercise began on Saturday, 12 May and involved a simulated armed terrorist attack scenario taking place in the terminal building. It tested the initial armed police response to deal with and neutralise the immediate threat to the public. The scenario also tested the police response to hostage and siege situations. This was then followed by the respective search, rescue, casualty management and recovery responses from the London Ambulance Service and London Fire Brigade. Heathrow staff also tested their own processes and procedures in partnership with the emergency services response. 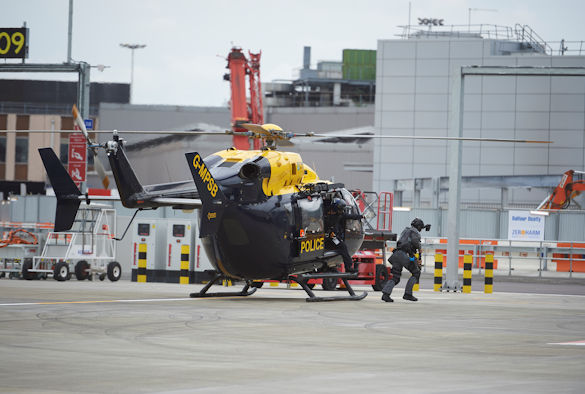 Day two of the exercise, which took place on Monday, 14 May, focused on victim and casualty identification and recovery, and tested investigative and forensic recovery processes. This was carried out within the context of a major international airport and the additional complexities that brings.

Professor Laurence Alison, who has worked with law enforcement agencies internationally for nearly 30 years, said: “This was one of the most impressive exercises we have been involved with – not just in terms of scale and size but in terms of the challenges it presented for all participants and the extent to which it achieved a fully immersive experience.

“Our role now is to support that effort by examining decision making, communication, response to casualties, as well as the actual effectiveness of the exercise for training. Although the data is complex, preliminary observations indicate that responding agencies were able to develop accurate situational models of what was going on from complex, fast-moving information, prioritise actions, anticipate problems and work towards common goals so as to preserve life and neutralise the threat.

“These are all hallmarks of expertise ‘in extremis’ decision making – where high stake decisions must be made under considerable adversity, risk and uncertainty. Our role is to assist all participants involved in the exercise to learn from the experience as well as, through our research, to pass this learning on to other forces and airports.”

Superintendent Dawn Morris, the exercise lead for the Metropolitan Police, said: “The challenges of dealing with any major incident at an airport the size of Heathrow are, quite simply, exceptional and the learning that we and our emergency services colleagues have gained through this series of exercises has been invaluable. This will not only benefit us in London, but we will share any learning we can with other forces and airports across the country.”

Chris Garton, Chief Operating Officer at Heathrow, said: “The safety and security of our passengers and airport colleagues is our utmost priority and this exercise is a key part of preparing an effective response, if the worst should happen at Heathrow or any other UK airport. What’s more, exercises like Raptor allow us to identify areas to strengthen and collaborate on in our partnership with the emergency services and police so the likelihood of an incident like this taking place can be even further reduced. We are proud to have taken part in such a complex and important exercise, and we will work with our partners to share the lessons we have learnt.”

This exercise is testing a number of different functions within the Metropolitan Police Services (MPS), including command and control, intelligence, firearms response, communications, and counter-terrorism investigation. Specialist teams from the London Fire Brigade (LFB) and London Ambulance Service (LAS) were also involved in the exercise. 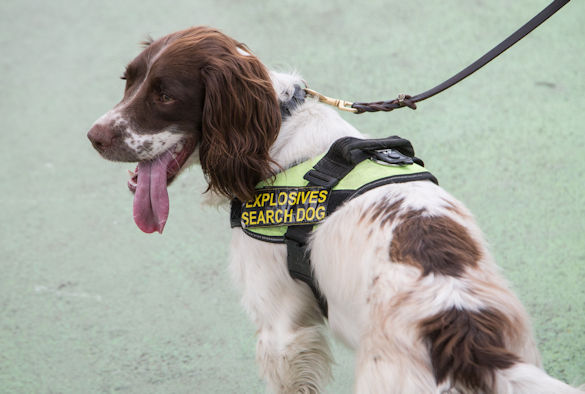 Around 500 volunteers from MPS and LAS also wore special effects make-up to look like realistic wounds in order to expose the first responders taking part in the exercise to the types of injuries that they might face should they be dealing with it for real.

Dr Michael Humann, working out of the University of Liverpool’s London campus, said: “It was a privilege to be involved in the exercise – both for our academic staff who are working on the evaluation and for our students from the MSc Investigative and Forensic Psychology course, who got to see the complexity and challenges of such events first hand. Everyone benefitted in terms of understanding both impact and the need for systematic research in this arena.”

University podcasts in relation to this subject can be found here and here.