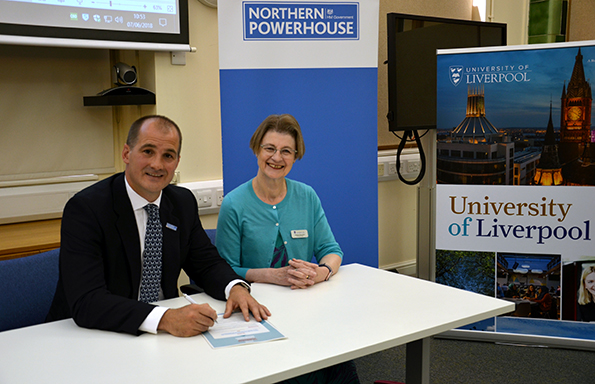 The Liverpool born MP gave the introductory talk before joining a day of sessions with leaders from major universities across all the northern regions, including University of Manchester, Sheffield, Newcastle, Durham, Hull and Lancaster, as well as N8 Director, Dr Annette Bramley and representatives from Liverpool City Region LEP and Liverpool City Council.

The event also saw the University of Liverpool sign up as an official partner of the Northern Powerhouse scheme.

University of Liverpool Vice-Chancellor, Dame Professor Janet Beer said: “I am delighted that we have had the honour of hosting this summit and that we signed the Northern Powerhouse Partnership Memorandum.

“The Northern Powerhouse is an important means by which to demonstrate the plentiful strengths of our northern cities.

“Universities have such a vital role to play in our cities’ successes. Universities act as anchor institutions with important missions to educate, to advance knowledge and, ultimately, to deliver public benefit.

“I know I speak for each of the institutions who were present when I say that we are firmly committed to continuing to deliver on these missions for our cities, not least through skills provision and our internationally recognised science and innovation outputs.”

The day focussed on how higher education institutions can deliver as anchor institutions, as part of wider local industrial strategies, through technological advancement, international exchange and innovation.

Professor Dame Janet Beer also spoke about the role Universities have as international hubs for innovation.

“I look forward to working with the University on further strengthening its research collaborations with partners across the globe to tackle some of the grand challenges of our time.”

The Northern Powerhouse partnership programme seeks to promote the strengths of the north, with a focus on five specific areas; connectivity and transport, education and skills, enterprise and innovation, trade and investment, and quality of life.