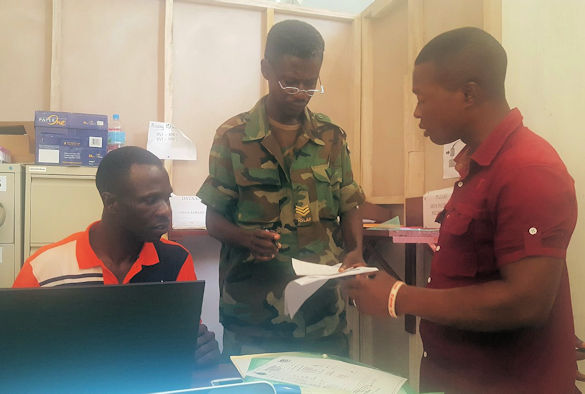 Above: The study team at Military Hospital 34, Freetown, Sierra-Leone

Researchers have shed new light on the psychiatric and neurological problems that Ebola survivors can suffer from, and call for more specialist support for the most severely affected patients.

A new report published in Emerging Infectious Diseases details a broad range of disorders among Ebola survivors in Sierra Leone, including stroke and debilitating migraine-type headaches. Some survivors are left unable to care for themselves.

The observational study was led by researchers at the University of Liverpool and King’s Sierra Leone Partnership of King’s College London, based in Connaught Hospital, Freetown and in collaboration with the Ebola Survivors Clinic at Military Hospital 34, Freetown, Sierra Leone, as part of an ongoing effort to better understand post-Ebola syndrome (PES) and improve on-going patient care following the 2014-2016 outbreak in West Africa.

To better understand the neurological and psychiatric effects of PES, adult patients with predetermined, significant symptoms such as confusion, depression and psychosis, were identified from the patient notes of over 300 Ebola survivors.

Thirty-four selected patients were invited to attend a joint neuro-psychiatric clinic in 2016 where they underwent a full neurological examination, psychiatric screening and specialist investigations including brain scan imaging.

The most frequent neurological diagnosis was migranous headache, followed by stroke, peripheral sensory neuropathy and focal peripheral nerve lesions. Most survivors had co-existent mental health needs, with the most frequent psychiatric diagnoses being major depressive disorder and generalised anxiety disorder.

Post-Ebola syndrome is ‘not going away’

Dr Janet Scott, who lead the Post Ebola Syndrome project at University of Liverpool, said: “We knew that a disease as severe as Ebola would leave survivors with major problems – however, it took me aback to see young and previously active people who had survived but were now unable to move half their bodies, or talk, or pick up their children.

“These cases are on the severe end of the spectrum– but thanks to support from the Wellcome Trust, we’ve been able to further investigate these cases and learn more about Ebola Virus Disease in the process. Our findings support the need for larger, case-controlled studies. Post-Ebola syndrome is not going away, and those with the condition deserve better treatment”

Dr Patrick Howlett, from King’s College London, carried out this study. He said: “We found a broad set of neurological and psychiatric symptoms, from minor to extremely severe and disabling, are present in Ebola survivors well over a year after discharge from hospital. In our selected group intermittent headaches were the most frequent neurological feature, with a variety of associated symptoms. Connaught Hospital continues to provide specialist neurological care for these patients, however there is an urgent need to support training for specialist medical professionals who can meet the needs of this survivor population.

“This was a broad collaboration coordinated from the University of Liverpool. The “Survivors Clinic” was based at Military Hospital 34, in Freetown, and got specialist input in Neurology and Psychiatry was provided by a Connaught Hospital, Freetown, with support from King’s Sierra Leone Partnership. We called on the particular skills of Radiology and Ophthalmology Departments at the Royal Liverpool Hospital to interpret the CT Brain Scans and retinal images. It highlights the need for a team effort in considering these complex clinical cases.”

Psychiatrist Dr Stephen Sevalie, 34 Military Hospital, added: “Psychiatric features of insomnia, depression and anxiety are common and our findings suggest that there is also a need for better understanding of the psychiatric and psychological consequences of Ebola Virus Disease. Although our Ebola Survivors Clinic includes an onsite councillor, there are many more who won’t have access to the specialist care they need so we will continue to research and provide hands on support to ensure this happens.”

The study and investigators were supported by the Wellcome Trust  ERAES (Enhancing Research Activity in Epidemic Situations) programme, and grants from the National Institute for Health Research (NIHR) Health Protection Research Unit in Emerging and Zoonotic Infections at the University of Liverpool. Additional support was received from Advancing Partners & Communities, a programme funded by the United States Agency for International Development through JSI Research & Training Institute.

Professor Mike Turner, Wellcome’s head of Infection and Immunobiology, said: “It has become clear that many people who survived Ebola infection in West Africa in 2014 have had long term effects on their health. This new study shows the damaging neurological and psychological effects of the virus, with survivors experiencing chronic migraines and strokes, as well as depression and anxiety. These findings demonstrate the devastating long-term impact Ebola has had on survivors’ quality of life, and their ability to participate in family life and with their community.”