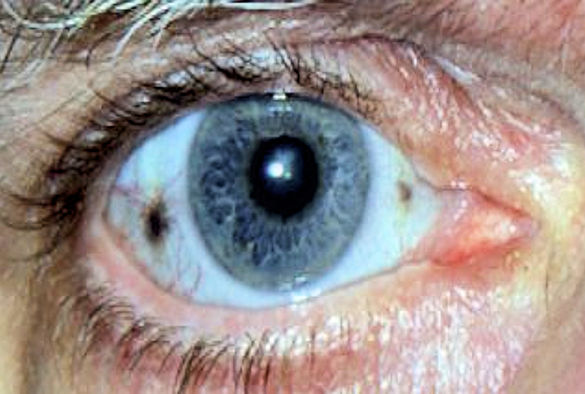 Spots on the eye due to alkaptonuria (Copyright NHS)

A new study published in Molecular Genetics and Metabolism, conducted by a Liverpool based research collaboration involving the University of Liverpool, has identified the drug that treats the extremely rare genetic disease alkaptonuria (AKU).

An observational study at the NHS-funded Robert Gregory National Alkaptonuria Centre (NAC), based at the Royal Liverpool University Hospital, in collaboration with the University of Liverpool and Cambridge charity the AKU Society, has shown that a drug called nitisinone stops the progress of AKU also known as black bone disease.

In the study, 39 people with AKU were given 2 mg of nitisinone each day for three years. Newly published results show that the drug stops the disease, by decreasing HGA. Further, nitisinone therapy not only arrested but also partially reversed ochronosis.

Results also show that it significantly reduces the damage caused by ochronosis, especially in joints. Patients who took nitisinone showed major health benefits. Osteoarthritis in the spine, knees and elbows was much less severe and the risk of heart disease was reduced.

Professor Lakshminarayan Ranganath, the NAC director, said: “These results bring hope to the more than 30,000 people who suffer from this disease worldwide. We knew already from earlier research that nitisinone substantially reduces HGA. We also knew that nitisinone prevented joint disease in AKU mice through research at the University of Liverpool. However, to show the benefit of nitisinone in people with AKU, for the very first time, the NAC team had to come up with innovative and pioneering approaches to study outcomes.

“I am very proud of everyone who helped us to get here.”

AKU patient Duncan Batty, said: “As a patient who has suffered from the degenerative effects of AKU for nearly 30 years it is fantastic news that an effective treatment has been identified. I am at the age when heart complications should start, but thanks to nitisinone there is no evidence of any issues.”

The full study, entitled ‘Nitisinone arrests ochronosis and decreases rate of progression of Alkaptonuria: Evaluation of the effect of nitisinone in the United Kingdom National Alkaptonuria Centre’, can be found here.