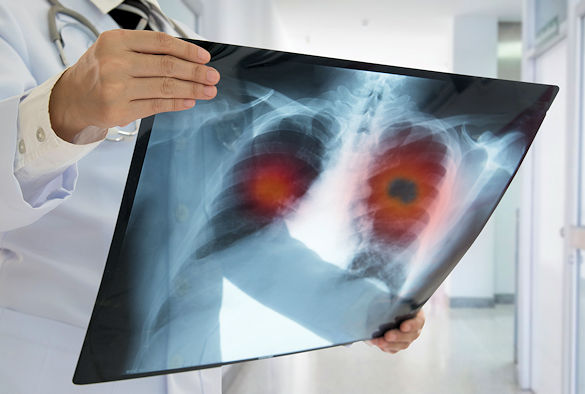 A ground-breaking project to detect lung cancers before symptoms even appear has already found and treated more than 40 new cases of the disease.

Liverpool has one of the highest mortality rates for lung cancer in England, and it’s also estimated that there’s over 6,000 people living with undiagnosed COPD (chronic obstructive pulmonary disease) across the city.

However a new independent study published by the University of Liverpool and Queen Mary University London on the impact of Liverpool’s Healthy Lung ‘MOT’ clinics has found they are bucking that trend by finding more cases of lung cancer and COPD at an early stage, when it’s most treatable.

The Healthy Lung programme (LHLP), which is run by NHS Liverpool CCG working in partnership with local hospitals, NHS England, Cancer Research UK and Macmillan Cancer Support, has been inviting those aged between 58–75 years, who have ever smoked and who live in areas of the city where lung disease rates are highest, to attend a routine lung health check – or lung ‘MOT’ – at their local GP surgery.

In total, these health check clinics have successfully found and treated 43 cases lung cancer amongst Liverpool residents since the programme launched in summer 2016, and they are continuing to spot 1-2 new cases every month.

The study found that over 75% of those who received a lung cancer diagnosis after attending a clinic received it at an early stage of the disease; when typically 70% of lung cancer cases are not diagnosed until a late stage in Liverpool, when treatment is more difficult.

Identified at an early stage

The programme is also helping to identify a number of other common lung-related conditions. One example was Councillor Steve Munby, who was invited to attend a lung health clinic earlier this year. He explains; “I’ve been a smoker for almost 40 years, so when I received a letter inviting me to attend a lung health clinic at my GP practice, it made complete sense to go.

“During my appointment, I was offered a scan which showed some small shadows on my lungs called ‘nodules’. The nurse told me these are fairly common, and thankfully it wasn’t lung cancer. A second scan showed they had gone, but getting checked out really helped put my mind at ease. I would definitely recommend it to others.”

The study findings show that 10% of those attending a clinic with no previous history of COPD received a first-time diagnosis of the condition. COPD symptoms include a cough with phlegm, breathlessness and wheeze. The good news is that the vast majority of these cases have been found at early stage too, allowing action to be taken to stop symptoms getting worse.

But despite the work of the Healthy Lung programme and its excellent track record for finding and curing more lung problems early, more than half (55%) of those in Liverpool who have been invited to attend this routine clinic appointment, have still not done so.

Ed Gaynor, Cancer Lead GP for NHS Liverpool CCG and part of the Healthy Lung Programme team said: “The findings in this study are great news for Liverpool, demonstrating how we are finding and treating more cases of lung cancer and COPD than ever before. But we also know that many more people across the city could be putting their health at risk unnecessarily by not attending a lung health clinic when they are invited.

“If you have received a letter from your GP inviting you to attend, either recently or at any time over the past year, you should book an appointment as soon as possible. Please don’t ignore it or put it off – even if you think you are fine and don’t have any symptoms.”

He adds, “The clinics are a routine check-up and nothing to feel worried about, and you may find that it puts your mind at ease to get checked out. And even if they do find any problems with your lungs during the appointment, finding out early will make treatment much more effective.”

One patient who found attending the clinic reassuring was Jane Gavin, an ex-smoker from South Liverpool. She said: “I felt quite worried when I first received my letter inviting me to have a lung health check because I had been a smoker in the past. But the nurse I saw was very reassuring and not judgemental at all.

“We had a chat about my general health and then she did a breathing test with me – the results of which were fine.

“It felt like a huge weight lifted off me. I was so relieved, and I felt encouraged that the lifestyle changes I’ve made over the years really have helped to improve my health.”

The UKLS lung cancer CT trial, lead by Clinical Professor of Molecular Oncology John Field from the University of Liverpool, provided the first evidence in the UK for screening individuals with a high risk of developing lung cancer with CT scans. The UKLS trial was published in 2016 and demonstrated the great benefits to the Liverpool community.

Professor Field, said: “This report provides further evidence for the very successful LHLP project, run by the Liverpool CCG, which has very similar result to the UKLS. The LHLP is an exemplar study on how to incorporate Healthy Lung Checks into the Primary Care community.”

Over the coming year, the programme will continue to be offered in new areas of the city. Clinics are currently being delivered in the Kensington area, and from September 2018 the service will also be inviting patients to attend in the Walton area.