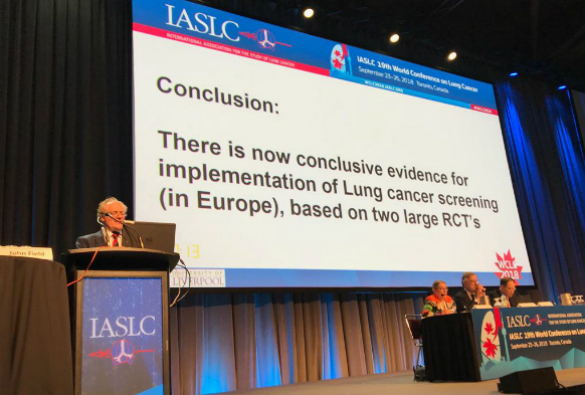 “Following the announcement of new findings from the Dutch-Belgian Lung Cancer Screening trial (NELSON) we now have conclusive evidence for the implementation of lung cancer screening in Europe.

I’ve been at the 19th World Conference on Lung Cancer (WCLC) in Toronto this week, where the NELSON team announced that the use of volume computed tomography (CT) screening among asymptomatic men at high risk for lung cancer led to a 26 percent reduction in lung cancer deaths at 10 years of study follow-up. The NELSON trial demonstrated an enormous benefit for women, with 39-61 percent over 8 to 10 years follow up.

The NELSON trial is the second largest lung cancer screening trial in the world and the results provide an even more favourable outcome than the first trial, the National Lung Screening Trial (NLST), which was run in America.

Last year I led on the EU Position Statement on Lung Cancer Screening (EUPS), which provides a strong recommendation that Europe must start planning now for implementation within the next 18 months.  These positive new findings should be used to inform and direct future CT screening in the Europe, and the rest of the world. Therfore, this result has a direct impact on the future of lung cancer screening in the UK.”