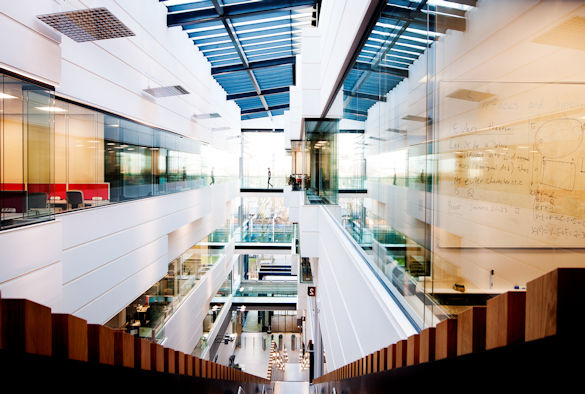 From cutting carbon emissions and air pollution to drug delivery, some of our world’s most pressing problems are dependent on the development of new materials.

This week, the Materials Innovation Factory (MIF) will officially open its doors providing a wealth of new opportunities for bringing together industrial and academic research into materials development—all under one roof—and a key activity will be the design of new functional materials.

Why is materials science so important?

As industry seeks to make its products more sustainable, it needs developments in materials science in a diverse range of areas such as paints, personal care products, semiconductors, and catalysts. For example, the demand for sustainable energy requires new battery technologies, more efficient capture and use of solar energy, and new materials to store new fuels.

A number of important materials have been discovered by chance—famously, the non-stick polymer, Teflon, is said to have be an unexpected offshoot in a programme that was looking for new refrigerant gases. Other materials result from deliberate experiments, typically by making variants of existing structures.

The science of materials chemistry—making new materials out of atoms and molecules—can be a slow and expensive process involving a combination of chemical knowledge, educated guesses, and careful experimentation.  If chemists want to make a material to tackle a specific problem, like storing hydrogen, it is pretty hard to find the answer by chance: at some level, you have to design it. For genuinely new materials, which have no known analogues, you need to design them from first principles—that is, “de novo”.

For now, though, there’s no comprehensive rule book for the chemist. Materials cannot yet be designed on a computer in the way that a building can be planned out by an architect.

“You can sketch out just about anything as a conceptual material but you’re not free to just make anything that you’d like” explains Professor Andy Cooper.

Chemists are constrained by thermodynamics: a material has to be stable if it is to be formed in the lab. Even just a few different elements can combine in an astronomical number of ways, most of which are not intuitive. Current computational methods cannot predict which combinations would be stable for such vast numbers of permutations, meaning it is very difficult to design from the atoms or molecules up. For this reason, there is a high failure rate in new materials discovery.

Rules-based design can take chemists so far, but new combinations of computational methods and experiment are needed to speed up and narrow the search for materials innovations. 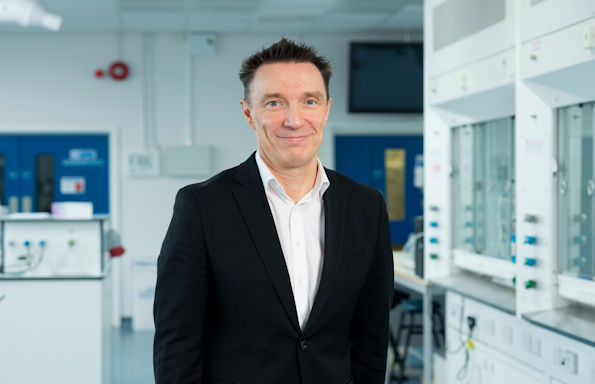 Together with Professor Graeme Day at the University of Southampton, Professor Cooper’s team has been using computational methods to predict how molecules assemble to form crystals, and to also predict the properties such crystals might have. The technique has provided researchers with maps, which they can use to search for the best molecules for a particular application.

One potential application is methane gas storage and delivery, for gas-powered vehicles. Methane does not interact strongly with surfaces so it is hard to design a material that can store a lot of it in a small volume. The Liverpool–Southampton team have applied their new mapping approach to this problem to identify a highly porous solid, which stores more than 150 times its own volume of methane.

This method works for organic materials that are made from molecules. In a parallel development, a team led by Professor Matt Rosseinsky at the University of Liverpool has created a method that can predict the composition, structure and function of inorganic materials, which are useful in a wide range of energy, catalysis and information storage applications.

Uniquely, this prediction method encodes existing chemical knowledge into the predicted structures to guide the experimental discovery of materials with remarkable structural complexity, demonstrated by the isolation in the laboratory of two materials with previously unseen compositions and structures.

“By developing computational tools to predict the structures of compositionally and structurally complex materials, we can offer a new route to the next generation of functional materials”, said Professor Rosseinsky. “These tools use chemical understanding to prioritise those parts of chemical space where the new materials are most likely to be found.” 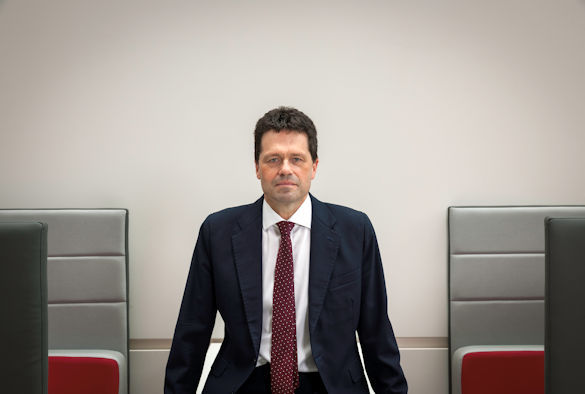 Both of these methods are at the forefront of functional materials design, and they were reported in two separate papers in Nature in 2017 (Nature, 2017, 543, 657; Nature, 2017, 546, 280), in work supported by the Engineering and Physical Sciences Research Council under the Programme Grant, “Integration of Computation and Experiment for Accelerated Materials Discovery”.

Both of these methods narrow down the search space, but it may still be necessary to carry out many experiments in the lab to understand how the best predicted materials can actually be synthesized. In the future, autonomous  robots being developed in Liverpool could allow a comprehensive search of the available experimental space to find the best materials that are identified by these computational mapping techniques.

In the future, autonomous robotic chemists being developed in Liverpool could allow the rapid search the available experimental space to find the best materials that are identified by these computational mapping techniques.

In particular, Professor Cooper’s team have developed a mobile robotic chemist that can work unassisted in the laboratory – here’s a video of it at work.

Supported by the Leverhulme Trust, the Liverpool team aims to build, in the next 12 months, a smart robot, powered by artificial intelligence, that can search continuously for specific functional materials with little or no human input.

“The idea of a relentless, 24/7 search robot is appealing”, says Professor Cooper, “but to me, the most exciting idea is not efficiency gains, but the chance to work on open-ended problems where we have weak hypotheses, and which are too complex or poorly mapped out to address using existing methods.”

A Fast Track to new materials?

Scientists at the University of Liverpool are working towards the ability to precisely arrange atoms and molecules to create new materials with specific, targeted functions.

This journey is underway at the Leverhulme Research Centre for Functional Materials Design – a ten year project with UK and international partners* – which opened last year. It brings together a cross-disciplinary team of chemists and computer scientists, working with experts in engineering, robotics, physics and management research. A ten-year horizon provides a rare opportunity to step back from the problem.

The Leverhulme Trust support gives scientists thinking time to come up with new and disruptive ways of working, with the potential to revolutionize materials design in the long term.  The team is exploring multiple avenues and making use of a wide range of approaches, blending experimentation, autonomous robotics, algorithms, and computation. Additionally, they are borrowing from other fields: for example, using state-of-the-art algorithms, designed for stock market analysis, to predict crystal structure.

Professor Paul Spirakis, a Computer Scientist and member of the Leverhulme Centre Leadership Team, said: “The prediction of the elementary structure of new materials is a prime example of the fight against Combinatorial and Computational Complexity. The optimal arrangement of atoms and molecules is, after all, a hard but not impossible problem in Optimization. And near-optimal designs may suffice”.

Machine learning and other AI-based approaches might one day provide the basis for an integrated platform that could explore predicted energy maps and carry out experiments autonomously. As yet, neither the ‘brain’ nor the ‘hands’ needed to drive this platform are available.

Both new search algorithms and new robotic hardware are required. Such platforms might also be powered in the future by new types of computing technology, such as quantum computers or neuromorphic chips, whose circuits mimic the electrical activity of biological neurons—but these do not yet exist as commercial technologies.

Changing the way we do science

The Leverhulme Centre provides a home for blue skies thinking. The University of Liverpool is also partnering with industry to build the most up-to-the-minute tools for taking scientific discoveries and for commercializing them. This is being done through the new Materials Innovation Factory (MIF), which will be officially opened this week by President of the Royal Society and Nobel Laureate, Sir Venki Ramakrishnan.

No ordinary factory, the MIF is a partnership between the University of Liverpool and Unilever, with a unique mix of disciplines in one building – robotics, computer science, physics, chemistry, and nanomedicine. The MIF is an open-access facility and staff will be trained in using state-of-the-art technology.

As well as maximizing the use of scientific infrastructure by supporting industrial research, MIF provides an exchange of ideas across multidisciplinary teams, creating those vital sparks that take science forward. An advanced robotic formulation platform – currently being built at the university – will enable researchers to make and test complex mixtures very quickly, and to develop better formulations of everything from paints to pharmaceuticals. 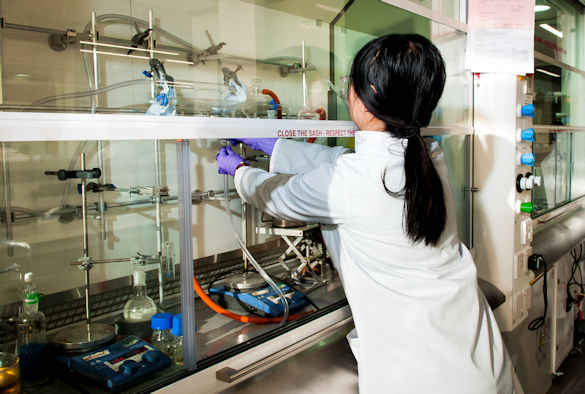 Iterative, manual methods will be replaced by mathematical models of the function required in a formulation, with robotics identifying the optimal components. This so-called ‘Formulation Engine’ will carry out automated processing, including operations such as mixing, heating and cooling, thus enabling researchers to see how materials behave under a wide range of conditions. The Formulation Engine will cater for large scale industrial application testing, as well as operating on a small scale for academic use.

Innovative robotics systems such as the Formulation Engine can also bring more reliability and reproducibility into the partners’ research, freeing researchers to focus on scientific understanding. The platform is also designed to be fast, thus accelerating research progress and enabling companies to design new products and processes much more quickly. “We will revolutionise the way that academia and industry in the UK performs research in materials science” claims Managing Director, Simon Longden.

The first industrial projects are with Unilever, focusing on home and personal care products. Academic programmes will tackle problems as diverse as renewable energy and nano-medicine, but with a shared vision for speeding up research. 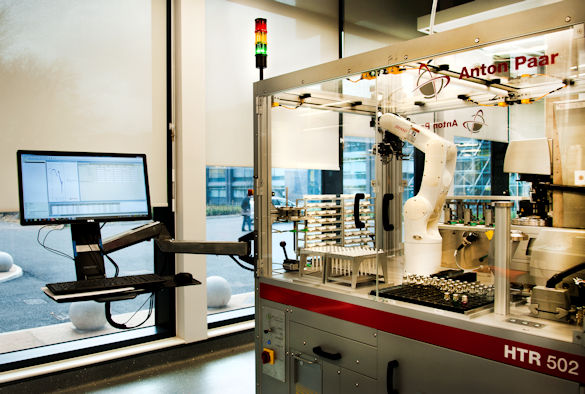 One important research area that will be accelerated by the Materials Innovation Factory is work on porous materials and their application in producing and storing fuels.

One potential clean fuel is hydrogen, which produces only water when it is burned. To be truly sustainable, however, its production needs to be clean and efficient. Borrowing from nature’s mechanism to harness the sun’s energy in photosynthesis, Liverpool scientists, funded by the Engineering and Physical Sciences Research Council, are working on a new hydrogen production route using photocatalysts.

Like home and personal care products, Photocatalysts can be complex mixtures, so automation and formulation facilities at the Materials Innovation Factory will be crucial in unlocking the best combinations for efficient hydrogen production.

This project is part of a push to develop mass-market hydrogen-fuelled vehicles in China, as the country tries to cut carbon emissions and tackle air pollution. The University is working with two Chinese organisations and the UK-based company, UlemCo. This Liverpool company has developed hydrogen combustion engines that can be retro-fitted onto diesel vehicles, allowing them to run on dual fuel.

Hydrogen must be carried on board these vehicles, but hydrogen gas is hard to store and to compress into a small space. Computational design can help to identify new materials that could absorb more hydrogen.

That challenge has crossovers with other work in Professor Cooper’s team on carbon capture and removing atmospheric pollutants. In particular, they have designed an organic material that can capture formaldehyde, which is a known carcinogen that is released from materials in newly constructed buildings. Work at the MIF is enabling the development of a prototype air filter for eventual use in homes and offices.

By embracing the materials design challenge, the University of Liverpool plans to keep the UK at the forefront of global materials research. 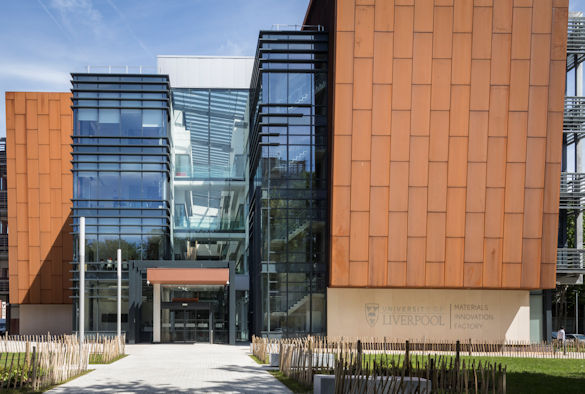