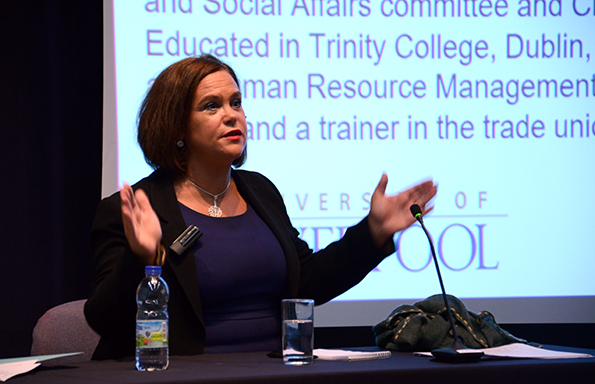 The Teachta Dála for the Dublin Central constituency was giving a talk at the University of Liverpool’s Eleanor Rathbone Theatre under the title: Remembering, Respect and Reconciliation – Building the Future Together.

“It is about building a new and united Ireland, a reconciled Ireland, a new Ireland that is a home to all people who share the island.

“An Ireland where it is possible to be British, Irish, both or neither.”

Dismissing British Prime Minister, Theresa May’s Brexit statement that she would not consider changes to the union, May Lou said “that ship sailed in 1998”.

Under the terms of the Good Friday Agreement (GFA), signed in that year, the British Government is obliged to act on any unity referendum vote.

And as part of that it will be necessary to “define a new relationship with Britain”.

Mary Lou McDonald said: “There are those in the North who are proud to be British citizens.

“They will remain British citizens in a new and united Ireland.

“Their citizenship must be respected and given effect in a new and united Ireland.”

Mary Lou, a former MEP, opened her talk by emphasising the ongoing process of peace and a commitment to “acknowledge suffering and respect all”.

She described herself as “a peacebuilder in the tradition of my friend, Martin McGuiness” and reaffirmed her support for the designation of a specific Reconciliation Day.

She also cited one of the few areas of agreement with Brexiters, the Irish Government and the EU around the continuation of the Common Travel Area, regardless of the outcome of Brexit negotiations.

Looking ahead, Mary Lou declared the “old conservative state in the south is gone” following the equal marriage and abortion referendums, adding: “I want to live in a reconciled and united Ireland.

“Sinn Féin is determined to build reconciliation and unity.

“There is no doubt that the current British government’s dependence on the DUP makes this a mighty challenge, but a new conversation has started, north and south.

“That is now under way. Change is coming.”

Director of the Institute of Irish Studies, Professor Peter Shirlow said: “Political paralysis in Northern Ireland and the destabilising impact of Brexit remind us of how timely Mary Lou McDonald’s commitment to peace-building and the maintenance of solid British-Irish relationships are at this time.”