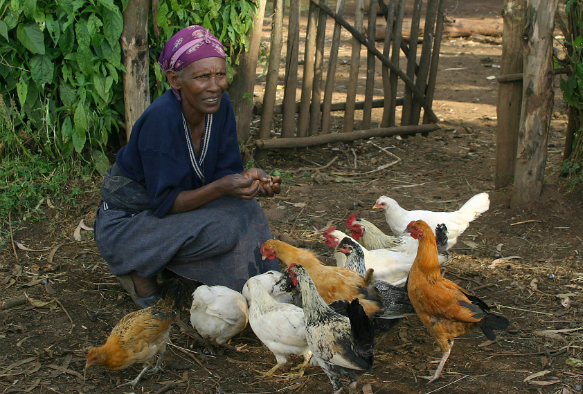 Adopting a more local and flexible approach to sustainable development could be key to boosting the productivity of small-scale chicken farms in Ethiopia, a new study reports.

Research led by the University of Liverpool, in collaboration with UK and African partners, reveals village chicken populations in Ethiopia to be genetically diverse and highly adapted to their local physical, cultural and social environments.

Published in Nature Sustainability, the study suggests that in order to be successful, development interventions such as breeding programmes need to consider this diversity and be locally tailored and designed to allow for flexible implementation.

Professor Paul Wigley from the University’s Institute of Infection and Global Health said: “That chickens are so locally adapted, despite often appearing similar, does present challenges to increasing productivity.

“There is not a ‘one size fits all’ chicken for Ethiopia or any village system. It could be argued that improvements in management, the use of vaccination and improvements to disease control such as simple biosecurity measures are as important as the genetic potential of the bird. Such measures need improvements in access to information and training.”

Chicken production is an important agricultural activity for many nations and can play an important role in reduction of poverty, and improved nutrition and gender empowerment. Whilst many people are able to raise village chickens and they require few inputs, productivity is low and constrained by, among other things, disease, predation and scarcity of feed.

There is much interest in trying to breed a chicken resilient to its environment, whilst providing the basis of an economically sustainable enterprise. Globally, however, a wide variety of interventions have so far proved unable to deliver sustainable improvements.

To better understand the barriers to sustainable development, the researchers investigated disease challenges, the genetics of the local chickens and, crucially, the nature of the production system and the socioeconomic reasons why chickens are kept.

The study was conducted in two districts of Ethiopia; Horro, around 300 km northwest of Addis Ababa and Jarso, around 400 km east of Addis Ababa. The genetics of the village chickens showed high levels of adaptation to their local ecosystems, resistance to disease and to the management and cultural variations of their environment. On top of adaptation, the data suggest that there have been multiple introductions of chickens in Ethiopia that may relate to trade routes, religion and culture.

Professor Rob Christley, who led the project, said: “The importance of culture and location should not be underestimated. Conventionally, the transfer of technology has often taken a top-down approach – from researchers to farmers – ignoring the considerable knowledge of the farmers. This often leads to interventions that are inappropriate to the social, physical and economic settings in which farmers operate, leading to unsustainable interventions.”

The research was carried out by the University of Liverpool in collaboration with the Universities of Edinburgh and Nottingham, the International Livestock Research Institute, the Royal Veterinary College and Wageningen University.

Funding support was provided by the Biotechnology and Biological Sciences Research Council (BBSRC), the UK Department for International Development (DFID) and the Scottish Government.