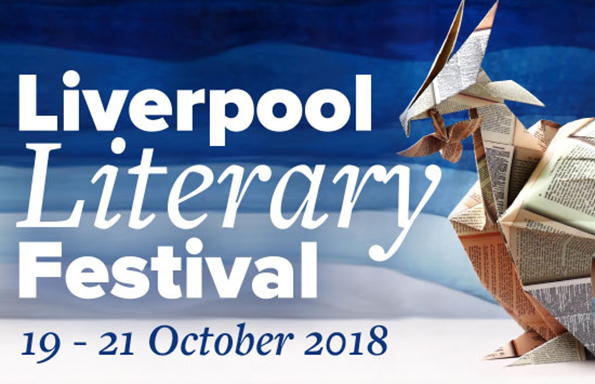 And there is still time to pick up your tickets, either online through the Liverpool Literary Festival website or in person at the iconic Victoria Gallery & Museum, the main Festival venue.

Tartan noir legend, Val McDermid kicks things off on Friday evening, with her Liverpool Literary Lecture Killing People for Fun and Profit. There are just a handful of tickets left for this event now, so make sure you grab yours before it’s too late.

Saturday’s schedule is packed full of activity. The Saturday headline showcase with Tony Robinson is now sold out, as is Sebastian Barry in conversation with Professor Roy Foster.

But there are still a few tickets available for New Voices with Alex Clark – featuring Booker nominee, Sally Rooney; an exploration of the art of graphic novels with Bryan and Mary Talbot; Memoir and Life-Writing with Clare Tomalin and Blake Morrison; and Melmoth author, Sarah Perry in conversation with the BBC’s James Naughtie.

Of particular interest to Liverpool audiences and music fans everywhere may be founding editor of Mojo magazine, Paul Du Noyer, Talking McCartney and Liverpool Music. The man behind the officially endorsed Conversations with McCartney will reflect on four decades of interviewing The Beatles and Wings frontman.

What better way to start a Sunday of language filled loveliness, than with Royal Society of Literature poetry, a croissant and a coffee all inside one of Liverpool’s most architecturally renowned venues? That’s exactly what is on the menu at the Peace Poetry Breakfast on Sunday morning. Make sure you don’t miss out on this perfect cultural beginning to an autumn day – the Festival’s Afternoon Tea with Clare Tomalin and Michael Frayne is already sold out.

Stick with verse into the afternoon by joining Bidisha and Holly Caulfield Carr for a discussion around Poetry and Image. The two cutting edge poets will be in conversation around their practice in writing, film and performance with the University’s own award-winning wordsmith, Professor Deryn Rees-Jones.

For something to a different beat, take a sideways look at Donald J Trump with David Hutter. David’s satirical novel Fake News imagines a world where the most outlandish events from history are brought into the present day and attributed to the US President – are they any more outrageous than current events or would even Trump balk at these extremes?

It might even inspire you to come up with storylines for the world’s longest –running soap opera, The Archers. It’s longest-serving scriptwriter, Mary Cutler and Gold award-winning producer, Sara Davies will share their insights into writing for the programme, and adapting novels for radio.

Finally, join Merseyside literary legend, Frank Cottrell-Boyce as we wrap up the Festival for 2018 with his talk on the impact of artificial intelligence on all of our lives, and ask, What will we do with all these people?

Liverpool Literary Festival takes place over the weekend, from October 19 -21. For more information, and to secure your tickets, please visit https://www.liverpool.ac.uk/literary-festival/

Liverpool Literary Festival is proud to be supported by Bruntwood.