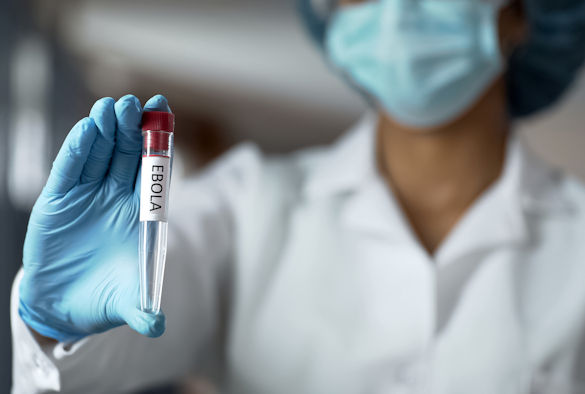 Researchers from the University, as part of an International consortium, have been awarded a €500K grant to respond to the imminent threat of an Ebola outbreak in Uganda.

In September 2018 the Democratic Republic of Congo (DRC) reported its 10th Ebola virus disease (EVD) outbreak, centred in the North Kivu province which borders Uganda. By 18 October 2018, a total of 223 confirmed and probable EVD cases, including 144 deaths (case fatality ratio 65%), were reported to the World Health Organisation (WHO).

New cases, deaths and suspects are being reported daily. The border with Uganda is porous with an estimated 8-10 000 people crossing between the countries on market days; outbreak preparedness in Uganda has therefore become a priority.

In the same month the European & Developing Countries Clinical Trials Partnership (EDCTP) launched a €2.25 million emergency funding initiative for research proposals to help in the response to the outbreak including necessary clinical studies of diagnostics, therapeutics and epidemiology which can only be done in the hopefully short period of the Ebola outbreak.

In order to provide the best available treatment in an outbreak with a disease that carries a high mortality, such as Ebola, the WHO has approved for drugs to be used under a protocol known as Monitored Emergency Use of Unregistered and Investigational Interventions (MEURI). Remdesivir is an example of an antiviral drug prioritised for use under MEURI, but as yet there are no published pharmacokinetic data.

Pharmacokinetics is a branch of pharmacology concerned with how drugs move through and out of the body —the time course of its absorption, bioavailability, distribution, metabolism, and excretion. If a drug is going to have an effect in the body it needs to be present in the right place, at the right concentration and for the right amount of time. Pharmacokinetic data helps researchers to develop more effective drugs.

Firstly, the researchers will examine the pharmacokinetics of remdesivir in healthy volunteers, and then in the event of an outbreak, in patients requiring treatment. Measurement of both remdesivir and the frequently used HIV drug, lamivudine, within cells will take place in the laboratory of Antonio D’Avolio at the University of Turin to explore a potential drug-drug interaction. Population pharmacokinetic modelling at the University of Liverpool will explore the variability in drug concentrations between individuals, and guide the best use of the drug in clinical practice where individual patient factors and impact of disease might influence drug concentrations. The pharmacokinetic workpackage will be led by Dr Catriona Waitt, Senior Lecturer in Clinical Pharmacology, University of Liverpool.

Disease surveillance, an information-based activity involving the collection, analysis and interpretation of large volumes of data originating from a variety of sources, will also be undertaken to evaluate the effectiveness of control and preventative health measures. This work will be led by Dr Mohammed Lamorde at IDI.

Finally researchers, led by Liverpool-trained Acute Physician, Dr Peter Waitt, based at IDI, will test the clinical care provision and training through the development of a surge-response model should the outbreak rapidly spread.

Dr Waitt, said: “This is an exciting opportunity to build on the existing partnerships between the University of Liverpool, the Infectious Diseases Institute and the University of Turin to explore drug dosing and safety in the face of a major public health threat.

“The research being conducted by the consortium aims to improve knowledge of the mechanism of action of a prioritised drug by generating local clinical pharmacokinetic data that is needed for accurate interpretation of sparse data from patients requiring the drug.

“Furthermore, in a setting of high HIV prevalence, we will explore drug interactions with antiretroviral drugs and to inform future treatment optimisation approaches. The results will provide the strong, evidence-based recommendation on dosing for human use, and may identify special populations in whom different dosing strategies should be considered.”