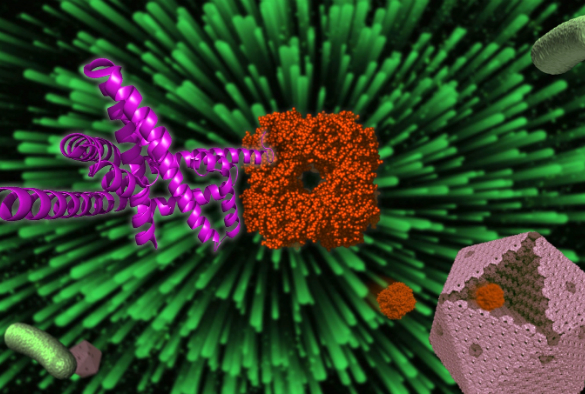 A new study by scientists at the University of Liverpool, published in the journal Plant Physiology, provides a molecular view of how the formation and function of protein ‘machines’ are regulated in the microscopic organisms called cyanobacteria.

The unique architecture of carboxysomes allows for a high efficiency of carbon fixation, which is important for bacterial growth. Their biological significance has attracted interest from engineers, who are keen to repurpose carboxysomes in crop plants to improve plant photosynthesis and growth. However, a barrier to progress in this area is a lack of functional understanding around their assembly and formation.

The research, led by Dr Luning Liu and colleagues in the Institute of Integrative Biology, studied in depth a protein RbcX, which has been identified as a helper protein for Rubisco formation but has not been considered in carboxysome engineering in previous studies.

Using a genetic approach to delete the gene encoding RbcX in cyanobacteria, the Liverpool researchers discovered that RbcX is vital for the formation of carboxysomes. Moreover, they attached fluorescent tags to RbcX and carboxysomes and used a fluorescence microscope to watch the action of RbcX in cyanobacterial cells. The results showed that RbcX actually acts as a structural component of the carboxysome and reveals new roles for RbcX in mediating the formation of carboxysomes.

First author Dr Fang Huang, a Leverhulme Trust Early Career Research Fellow, said: “We are excited to unveil the physiological functions of RbcX, which appear to be a very important element for carboxysome biosynthesis. Our study reveals that it is crucial to include RbcX in bioengineering to build synthetic carboxysomes that are similar to the native form.”

“This substantially encourages us to seek other factors that are key in carboxysome formation”, added lead researcher Dr Luning Liu. “In a translational term, our improved knowledge about the accessary factors of carboxysome formation will give synthetic engineers the optimal strategies to construct active carboxysomes in different hosts, such as plants, with the aim of boosting plant photosynthesis and productivity.”

The paper Roles of RbcX in carboxysome biosynthesis in the cyanobacterium Synechococcus elongatus PCC7942 is published in Plant Physiology.