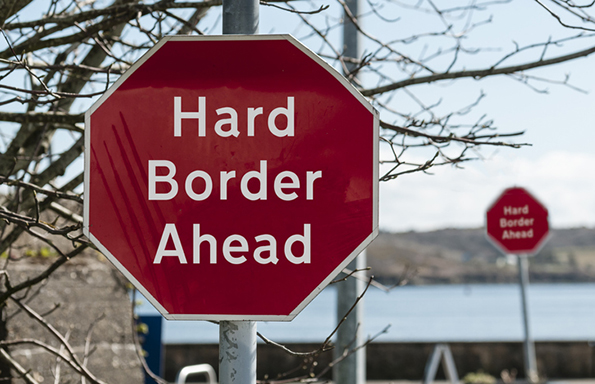 The challenge of avoiding a physical border for the movement of goods across the island of Ireland has dogged the UK’s process of withdrawing from the EU since the outset.

The latest fashion in Leave propaganda is to pretend that the border question has been deliberately manufactured by the EU as a means of punishing the UK.  However, every rational actor agrees that this is a serious and difficult problem, made worse by the decisions of the Government.

Other factors add further complication.  First, a clear majority in Northern Ireland voted remain in the 2016 referendum.  Secondly, the Government has dropped any pretence of “honest broker” between the two main communities in Northern Ireland thanks to its parliamentary dependence on the Democratic Unionist Party, which holds an entirely disproportionate influence over the withdrawal negotiations.

The EU-UK Joint Report of December 2017 set out an agreed approach to the Irish border question.  The UK is pinning its hopes on finding a solution simply as part of the overall future EU-UK relationship.  The problem is that the UK has so far proved incapable of offering any credible model for that relationship.  The “Chequers Plan” has been dismissed as unworkable by the EU27 and as unacceptable by large numbers of MPs across both Government and opposition ranks.

The Joint Report promised that the withdrawal agreement must in any case contain a legally binding “backstop” to prevent the return of an Irish border, e.g. in case no suitable final agreement on the future EU-UK relationship can be reached within the time available.

The UK’s alternative proposals from June 2018 were themselves dismissed as inadequate, e.g. since they suggested merely a temporary arrangement – not the long term solution any backstop needs to provide.

The European Council in October 2018 declared that no decisive progress had yet been achieved.  With the onus on the UK to come up with fresh proposals, the Government has offered various ideas, e.g. the backstop should cover the entire UK territory (not just Northern Ireland); though there might be an alternative option to extend the post-withdrawal, status quo transitional period; but either model would have to contain clear termination provisions.

The EU doubts there is enough time to negotiate the details of a UK-wide backstop –still insisting on a Northern Ireland-only backstop in the withdrawal agreement while talks continue on any UK-wide alternative.

In addition, for any UK-wide backstop to be viable, it would have to ensure a level playing field between UK and EU businesses: e.g. competition and state aid rules, potentially minimum employment and environmental standards.

Most importantly, the UK’s ideas still assume that a solution to the Irish border can and will soon be found at the level of the overall future EU-UK relationship – so that any backstop might only be needed for a few months (if it is ever needed at all).  But frictionless trade of the sort required to avoid a hard border in Ireland is simply not possible once the UK leaves the Customs Union and the Single Market.  No alternative future relationship – no matter how close and certainly not the Chequers Plan – can deliver the same result.

So any UK-wide backstop still has to rule out a hard border potentially on an indefinite basis.  To make that sound less unpalatable, the Government seems to suggest a joint or independent review mechanism for terminating the UK-wide backstop when certain conditions are met.  But such a mechanism is still potentially indefinite if those conditions never materialise.  And it obviously falls far short of the unilateral right to terminate demanded by Leavers.

To solve the conundrum, the Government is going to have to break some of its previous promises: someone is going to be disappointed…  The question is: who?  And how far will that damage the prospects for securing a withdrawal agreement with the EU and / or facilitating its successful passage through Parliament?