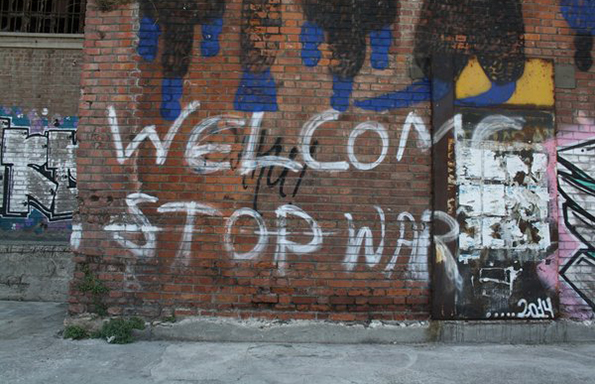 TATE Liverpool is hosting a walking tour of the Balkan Routes taken by refugees fleeing war and persecution in Syria and other conflict zones, following research activity in the region by University of Liverpool academics.

Dr Gemma Bird, from the University’s Department of Politics, has teamed up with colleagues at Aston University to present photographs and stories from the impermanent settlements that sprung up in the wake of the peak of the movement in 2015.

Dr Bird said: “In the years following the height of the “refugee crisis” in 2015 the project revisits some of the key sites along the Balkan Route(s) where an estimated 80,000 displaced people are now living within cities, refugee camps and informal settlements.

“We trace the route from the Aegean Islands, through the Greek hubs of Athens and Thessaloniki into the border regions of Serbia, and the capital city of Belgrade.

“We visit abandoned spaces, refugee camps and re-purposed buildings; hear stories of lives put on hold whilst stuck in transit, but simultaneously, acts of solidarity between refugees and activists and messages of hope.”

On Tuesday, Wednesday, Thursday and Sunday this week, visitors can take their own walking tour of the Balkan Routes, and be introduced to the research and imagery at the core of the team’s endeavours.

Later on Thursday, there will be Thursday will be a discussion with activist and aid worker in Athens, Andrea Contenta.

On Friday, Warwick University Reader in International Security, Dr Vicki Squire will discuss her research on the City Plaza squat in Athens, and attempt to debunk some of the myths around immigration.

Saturday’s programme begins with children’s story time, including crafts and readings from refugee journeys, before a Conversation with activists.

Here, visitors will have the opportunity to talk to activists and volunteers supporting refugees in hot spots in Greece, Serbia and Bosnia.

There will also be crafting activities, in particular a quilting project that will ask visitors to share their views on the refugee movement.

The exhibition stems from collaborative fieldwork carried out between 2015 and 2018 by Dr Gemma Bird and Aston University’s Dr Jelena Obradovic-Wochnik, Amanda Russell-Beattie and Dr Patrycja Rozbicka.

Refugee journeys through the Balkan Route: A crisis no more? runs at Tate Exchange, Tate Liverpool from Tuesday November 13 to Sunday November 18. To find out more, please visit: https://www.tate.org.uk/whats-on/tate-liverpool/tate-exchange/workshop/refugee-journeys