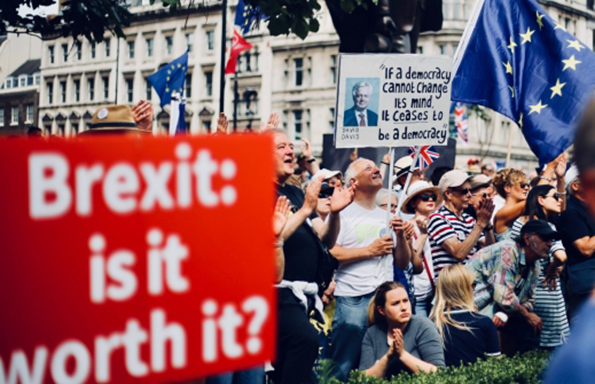 Publication of the 585-page Brexit-deal document was immediately followed by swift criticism of Mrs May’s negotiating ‘outcome’ and a series of cabinet resignations. When academics examine a PhD student, they are sent a thesis with 200+ pages and are then asked to examine the candidate no less than a week later. How on earth everybody read the Brexit document in a few hours to…start firing remains a mystery to us. A snap YouGov poll suggested that 42 per cent oppose Mrs May’s deal. Notice, however, that a massive 39 per cent answered that they did not know whether to back or oppose the deal.

In any case, it comes as no surprise that Mrs May put forward a very vague deal, which, in essence, kicks the Brexit ‘can’ down the road. In our view, this is because any concrete Brexit deal will be inferior to the current status quo. She knows this very well and she is not willing to face the electoral blame.

In extending the Brexit transition to…20XX, Mrs May appears to believe that a version of the so called ‘Chequers plan’ works. Recall that the Chequers plan proposes tax or tariff-free trade with the EU, while leaving the UK free to pursue trade deals outside the EU. The plan suggests that the UK would collect tariffs on the EU’s behalf for any goods entering the country but destined to be sent on to EU countries. The 585-page document is not clear on whether we will eventually become the ‘tax collector’ of the EU.

In any case, this very plan has already been indirectly torn apart by the publication of the 2018 Global Competitiveness Report. This report, published by the influential World Economic Forum, suggested that, among 140 countries, the UK economy lost competitive ground as it dropped down from 6th place in 2017 to 8th place in 2018. The report also noted a deterioration in the UK ‘product market’ environment. The product market environment refers to domestic competition and trade openness; the latter relating to trade tariffs, complexity of tariffs and efficiency of the clearance process.

Since the UK is already witnessing a deteriorating performance in this very area, why on earth are we insisting on a version of the ‘Chequers plan’, which proposes an even more complicated clearance process? Even worse, why on earth Germany seems (?) to agree on us doing the clearance process for them when they are already ranked the best country in the world in doing this job, while we are ranked ten places behind them? 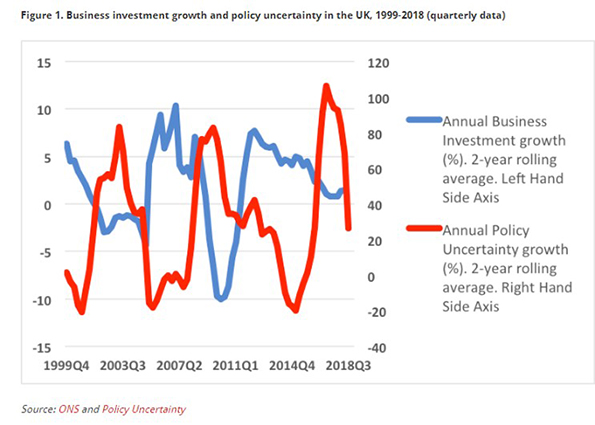 Notice from Figure 1 that policy uncertainty, which increased rapidly on our way to the EU referendum, recorded a notable decline only after early 2017, when Theresa May decided to trigger Article 50. Indeed, by eventually triggering Article 50, our government was ‘forced’ to start negotiating with our EU partners in a constructive manner. In fact, Figure 1 identifies a clear negative relationship between business investment growth and policy uncertainty. Higher policy uncertainty makes firms less willing to invest in the UK economy, which takes its toll on our future economic prospects. In fact, according to the Confederation of British Industry, 80 per cent of businesses say that Brexit affects negatively their investment decisions.

Critics of Mrs May think that we can get a ‘better’ deal. On what grounds really? Our EU partners have long realised (and witness this even more based on today’s resignations) that our government appears in ‘disarray’. Why on earth would they be willing to concede more when we are in such a weak negotiating position?

The point is that we are sleep-walking to a ‘no-deal’ Brexit. Ending up with a no-deal Brexit will push the Bank of England to the limit. Backed up by our brand new research, the Bank’s policymakers will be forced to stave-off the adverse impact of a huge fall in confidence and business investment through monetary stimulus.

It won’t be the first time. Indeed, Mark Carney and his Monetary Policy Committee (MPC) fellows had to step in to ‘save the day’ the morning after the referendum date when David Cameron was too busy resigning as Prime Minister. The hope is that they will be spared from doing the same job again.

So what are the alternatives? Mrs May could take her Brexit deal to the people’s vote. That is, call immediately for a referendum on her Brexit deal: her deal versus the current status quo as an alternative. No more Brexit games. Going back to the negotiating table in the hope that the same negotiators will come up with something (slightly) more meaningful is a folly. Our economy cannot afford any more Brexit games. As simple as that.