Scientists at the University of Liverpool have uncovered some unexpected ‘foreign’ genes in the tiny itch-inducing chigger mite and its more benign but enormous cousin, the giant velvet mite.

Genome sequencing of these mites, both members of the trombidid mite family, reveals them to have functional genes for producing terpenes – naturally occurring and often fragrant compounds that are commonly found in plants, but extremely rare in the animal world. Plants use terpenes to ward off pests that might eat them and to attract helpful pollinators, while their aromatic nature makes them key components of essential oils used in perfumes, aromatherapy, food flavourings and more.

The orange or red coloured mites were also found to have genes for making carotenoids, the pigments responsible for the distinct coloration of carrots and egg yolks.

Sequence analysis of these terpene and carotenoid genes shows that they were incorporated into the mite genomes by ancient horizontal gene transfer from soil bacteria and fungi, respectively. Although this in itself is not an uncommon process, it’s very unusual for foreign genes to remain functional in animal genomes.

The terpene finding is particularly exciting for the infectious disease researchers as it could lead to new ways of controlling the chigger mite, the bite of which is not only intensely irritating (a condition known as ‘scrub itch’), but can transmit the life-threatening bacterial disease scrub typhus.

Scrub typhus is prevalent across the Asia-Pacific region, affecting around one million people each year and killing 5-10% of those not treated promptly with antibiotics. The disease, which is spread through the bites of infected larval chigger mites, came to wider attention during World War II after afflicting soldiers operating in the southwest Pacific region.

Lead researcher Dr Benjamin Makepeace, from the University’s Institute of Infection and Global Health, said: “Our team was startled by the remarkable finding that trombidid mites have a metabolic capability normally only seen in plants, fungi and bacteria. There is currently no effective vector control for chiggers, but it is hoped that in the future, terpene extracts could be used to attract chiggers into insecticide-laced traps.”

The function of the mite terpenes is not yet known, but they are predicted to act as sex or aggregation pheromones. The next steps for the researchers will be to extract terpenes from the mites and test their effects on chigger behaviour.

The study was led by the University’s Institute of Infection and Global Health in collaboration with the Centre for Genomic Research, the Liverpool School of Tropical Medicine and Xi’an Jiaotong-Liverpool University (XJTLU).

The paper ‘Genomes of trombidid mites reveal novel predicted allergens and laterally-transferred genes associated with secondary metabolism’ is published in the journal GigaScience. 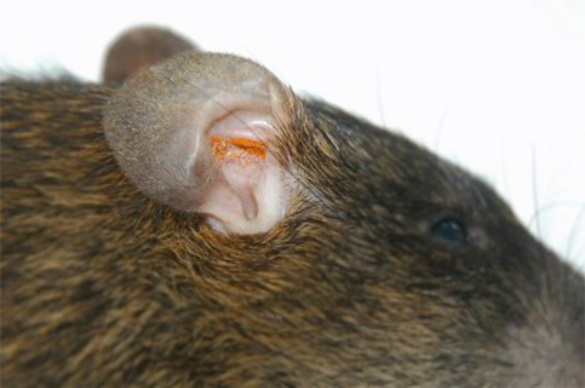 Chigger mites in the ear of a rodent. Photo by Kittipong Chaisiri