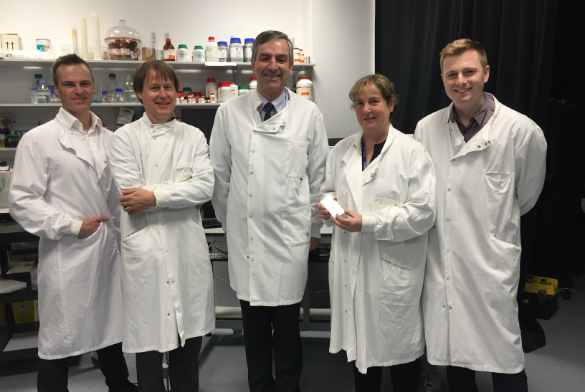 University of Liverpool research is set to be launched into space to help tackle the effects of ageing.

Scientists at the Institute of Ageing and Chronic Disease have received more than £1.1 million from the UK Space Agency to study age-related loss of muscle mass in microgravity.

Liverpool is one of just three UK-led projects to benefit from nearly £3 million of new funding announced today, ahead of the 20th anniversary of the International Space Station (ISS).

Spaceflight is an extreme environment that causes many negative health changes to the body and astronauts can lose up to 40 per cent of their muscle after 6 months in space. These changes are regarded as an excellent model for the ageing process in the body, and scientists can use the knowledge gained from studying changes in astronauts to better understand the ageing human body.

Due to launch in 2021, the experiment will see muscle cells grown in a laboratory sent up to the ISS where they will be stimulated to contract using electricity. The researchers will then examine the changes that occur in them once they return to Earth. They will also test the effects of exposing some of the muscle cells to increased amounts of protective heat shock proteins, which may change the way they respond to the harsh environment of space.

The findings from the study will improve our understanding of the processes that underlie muscle loss in space and in elderly people on Earth and indicate potential therapies to prevent it.

Project co-ordinator Professor Malcolm Jackson said: “Ageing is one of the greatest challenges of the 21st century and so the opportunity to use microgravity to help understand the mechanisms underlying age-related muscle loss is really exciting.

The Liverpool team brings together interdisciplinary research expertise from the University’s Institute of Ageing and Chronic Disease and Department of Electrical Engineering & Electronics with the technical expertise of industrial partner, Kayser Space Ltd and external consultant Dr Chris McArdle. Specialist laboratory facilities at Sensor City will also be used to simulate the stresses and strains of launch on the muscle cells.

While age-related muscle wasting has a major impact on the quality of life of older people the causes of the process are not fully understood. The UK’s ageing society is one of four grand challenges identified by the government’s modern Industrial Strategy.

Science Minister Sam Gyimah said: “This research will help those with muscle conditions to live longer, healthier, happier lives, and is a great example of our modern Industrial Strategy in action – transforming life on earth through out-of-this-world research.”

Dr Graham Turnock, Chief Executive of the UK Space Agency, said: “For 20 years the International Space Station has provided a unique laboratory for astronauts to carry out cutting-edge research. As we celebrate all that has been achieved over the last two decades this new funding puts UK academics at the forefront of future pioneering scientific research, allowing us to gain knowledge that will improve life on Earth.”