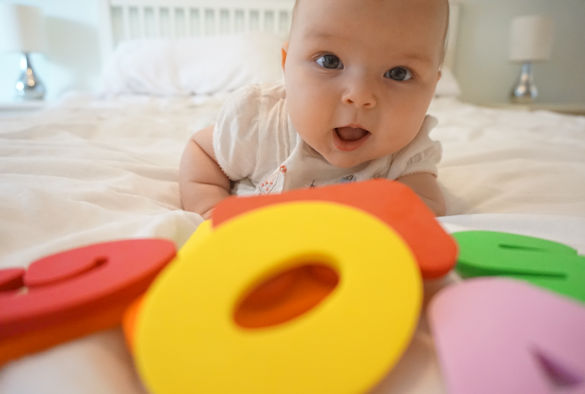 When do babies in the UK start to talk? What are their first words? Do girls really learn to talk earlier? How does living in poverty affect how quickly children develop? How do we know when a child is falling behind in their language development and needs a little bit of extra help?

Research from the University of Liverpool trying to answer these questions is featured on an exciting new BBC 2 programme starting at 9pm today (Monday 26th November) called ‘Babies: Their Wonderful World’.

This programme describes results from a huge Citizen Science project, in which researchers asked over 2000 parents of children aged 8 to 30 months to tell us what words their children can say, by filling in a UK-CDI (Communicative Development Inventory).

CDIs are questionnaires we use to measure children’s language knowledge at different ages. CDIs are great because they are filled in by parents, at home, at a time that suits them. CDIs have been created for over 35 different countries but, until recently, there were no CDIs specifically for UK children.

The pilot data revealed some novel findings about regional differences across the UK. Some of these are easy to explain. For example, in Wales, Yorkshire & Humber, and the East of England more children used tea to refer to a meal than a drink, but In London, Scotland, South West, South East, West Midlands and East Midlands tea is used to refer to a drink much more often. This makes complete sense; children in the north of England use the word tea to refer to the evening meal, whereas children in the south and West Midlands use the word “dinner” instead.

But other findings are more curious. For example, Dr Michelle Peter from the University of Liverpool’s ESRC LuCiD Centre, said: “Babies in London are least likely to have thank you and sorry amongst their first words. But on the other hand, they are also the children who are most likely to say please and yes. So they may not be thanking you for things, but at least they are asking you for them politely! And for those of us who know anything about toddlers, having a child who says yes – instead of no all the time – is a godsend”

Professor Caroline Rowland who ran the UK-CDI pilot project with colleagues from the Universities of Lancaster and Lincoln, said “We are now analysing these results carefully to decide which words to include in the final version of the UK-CDI. This is important because CDIs need to contain words that discriminate well between young and old children, and between fast and slower talkers.

“We will then collect more information from over 1000 parents using our new CDI, and use this information to build up a picture of how UK children learn to talk between 16 and 30 months of age.

“This will have a substantial impact on our knowledge of how children learn to talk here in the UK, and provide health visitors and preschool teachers with the information they need to identify which children might be slow to learn to talk, and put interventions in place to help them speed up.”

The first episode of the programme will feature Dr Michelle Peter from University of Liverpool’s ESRC LuCiD Centre.

Find out more about the work on language development conducted at the ESRC LuCiD Centre here: www.lucid.ac.uk