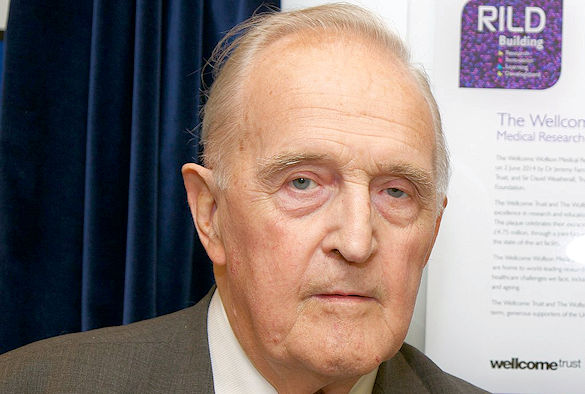 The University is saddened to learn of the passing of Professor Sir David John Weatherall GBE MD FRCP FRS, alumnus and Honorary Graduate of the University, on Saturday, 8 December 2018.

Sir David John Weatherall was born in Birkenhead on 9 March, 1933. He was educated at Calday Grange Grammar School and then graduated from the University’s Medical School in 1956. While at the University, he served as Treasurer of the Liverpool Medical Students Society in 1954.

Returning from military service after two years, he took a fellowship at Johns Hopkins University before returning to Liverpool, where he became Professor of Haematology.

In 1974 he was appointed Nuffield Professor of Clinical Medicine at the University of Oxford, and, in 1992, he was appointed Regius Professor of Medicine, from 1992 to 2000. In 1989, Sir David founded the Institute of Molecular Medicine at Oxford, which was renamed the Weatherall Institute of Molecular Medicine in his honour in the year 2000 upon his retirement. He then became Chancellor of Keele University.

He was knighted in 1987 and appointed Knight Grand Cross of the Order of the British Empire (GBE) in the 2017 Birthday Honours for services to medicine.

His research concentrated on the genetics of the haemoglobinopathies and he was one of the world’s experts on the clinical and molecular basis of an inherited blood disorder called Thalassemia. This research has helped with the control and prevention of these type of diseases in the developing countries.

In 2014 the University of Liverpool established the ‘David Weatherall Chair of Medicine’ in honour of his contribution to medicine.

“The contribution David made to the life and work of his students, colleagues and friends will be remembered and valued by them for many years to come. He was a great ambassador for Liverpool, and a giant in medicine. He will be greatly missed by all of those who knew him.”

“Weatherall defined molecular medicine, as we know it today” commented Professor Tom Solomon, who was Weatherall’s house physicians in Oxford and remained a friend. “He was a mentor to many clinician scientists who now hold senior positions in UK medicine. I was with him just a few weeks ago, and right up to the end he retained his scouse sense of humour.”