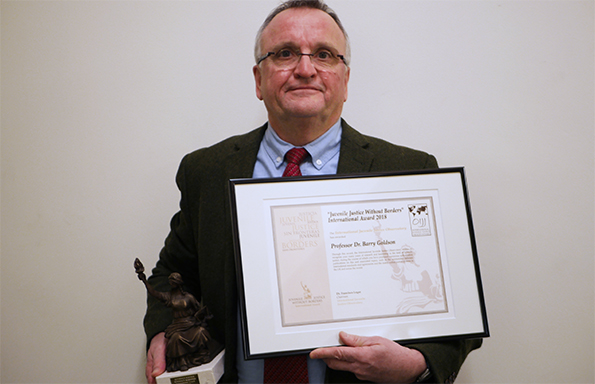 This award, represented by a statuette of Lady Justice, recognises the work of professionals and organisations that contribute to the improvement of juvenile justice systems, and to the protection of the rights of children and youth throughout the world.

“I am also humbled to be joining the highly prestigious company of previous recipients of the Award, many of whom I respect and admire for their outstanding contributions to the global juvenile justice project.

“I am also hopeful that by shining a light on more than a million children deprived of liberty in various contexts around the world, the United Nations Global Study will guide responses to such children in ways that are respectful of their needs and human rights”.

Professor Barry Goldson has been awarded for his extensive career as a researcher in the field of juvenile justice, analysing its development and implementation in different countries in the context of international human rights standards and the child-centered approach promoted by the Council of Europe, as well as for his work as an expert advisor in juvenile justice systems for the United Nations and different parliamentary committees and non-profit entities.

In celebrating the excellence demonstrated by the six high achieving professionals and organisations awarded on this 5th edition, the IJJO hopes to encourage development in the field of juvenile justice by increasing awareness of the issues faced by children in conflict with the law and at risk of social exclusion.

In the words of the IJJO Chairman, Francisco Legaz Cervantes, “our wish is that the recognition of these winners not only be an award for their achievements, but also a source of inspiration for the international community”.

Professor Barry Goldson is joined by the following five other awardees of the 5th Edition:

The Centre for Legal Studies (Spain) has been awarded for its work in expanding training and updating the knowledge of legal professionals at national and international levels. Their work helps to modernise the justice system and promotes a juvenile justice system that respects international standards and focuses on the prevention of juvenile delinquency, the protection of the rights of children and adolescents in contact with the justice system, and the reintegration of young people in conflict with the law.

The NGO Human Rights Watch has been awarded for its commitment to protecting the rights of children around the world, especially those in contact with the law; denouncing violations of their rights; reporting on the shortcomings of justice systems to incorporate international standards; raising awareness among stakeholders on the need to reform laws, policies and programs, always focusing on the best interests of the child; and giving voice to those who defend the most vulnerable members of society.

The NGO Salesian Missions has been awarded for its work in more than 130 countries to remove children from situations of exclusion, poverty, violence and abuse, and to promote education, employment and healthy lifestyle habits. Its work to prevent juvenile delinquency and the social reintegration of child soldiers is particularly recognised, with projects focused on offering children an education and dignified living conditions that help them reach full integration in society, separating them from marginality and crime.

Terrie Moffitt (United States), clinical psychologist, researcher and Professor at Duke University, has been awarded for her distinguished academic career dedicated to the comprehensive analysis of human development, including antisocial and criminal behaviour, her research having contributed to the development of more effective evidence-based juvenile justice policies and practices in various countries. The IJJO also highlights her work in different longitudinal psychological studies whose findings help to improve the understanding of various aspects of human behaviour.

Alessandro Padovani (Italy), psychologist and director of the Social and Educational Area of ​​the Istituto Don Calabria, has been awarded for his long career dedicated to the prevention of juvenile delinquency and the rehabilitation of young people in conflict with the law. He is recognised in particular as an expert of Italian juvenile courts, where he has promoted an approach focused on the specific needs of children, and for his training and research work in this field at the Istituto Don Calabria.