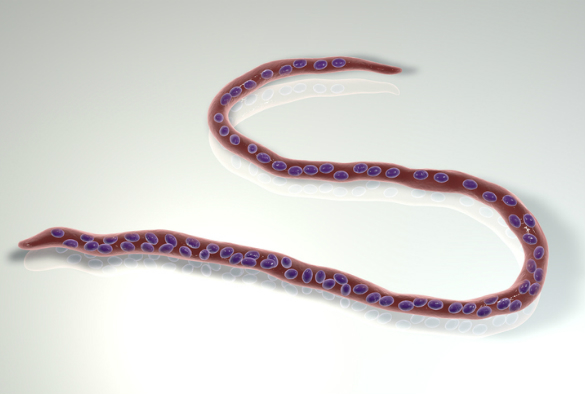 Researchers from the University of Liverpool and Liverpool School of Tropical Medicine have successfully optimised a hit from a whole cell screening of a 10000-compound library to deliver the first novel fully synthetic and rationally designed anti-Wolbachia drug, AWZ1066S, which could potentially be used to treat onchocerciasis and lymphatic filariasis.

Onchocerciasis (also known as river blindness) and lymphatic filariasis (also known as elephantiasis) are neglected tropical diseases caused by filarial parasites that can lead to severe disability. The inability of current drugs to kill adult parasites has highlighted the urgent need for new curative anti-filarial drugs for these debilitating diseases.

In the search for new anti-filarial drugs, the team have focussed on targeting Wolbachia, a bacterial symbiont that is essential for parasite development and survival. Although the anti-filarial drug, doxycycline has proven effective clinically through the depletion of Wolbachia, the treatment regimens are protracted, and contradictions restrict its widespread implementation.

Professor Steve Ward, Deputy Director of LSTM, said: “The identification represents the first potential designer drug of its kind, specifically targeting Wolbachia as a curative treatment for onchocerciasis and lymphatic filariasis. The candidate selection status of this compound represents the successful conclusion to a multidisciplinary teams efforts to generate the first synthetic drug specifically developed to target this bacteria and we are really excited to take the compound to the next stage of its development. Over 157 million people globally are affected by onchocerciasis and lymphatic filariasis, this particular molecule has the potential to shorten that timescale of treatments from weeks to days which could significantly impact the international timetable for the elimination of these two neglected tropical diseases.”

Professor Paul O’Neill from the University’s Department of Chemistry commented: “The novel synthetic molecule, AWZ1066S, was designed and developed at Liverpool from screening hits, and involved multi-parameter chemical optimisation with evaluation of over 400 analogues. Our approach has provided a molecule with high potency and specificity against the target pathogen along with desired oral drug properties. A key to the success of the programme was a combination of our in-house expertise in medicinal chemistry in parallel to a close working relationship with our industrial partner Eisai Ltd with additional support from AstraZeneca.  This enabled development of this drug in a very short time frame.”

AWZ1066S’s high specificity is a significant advantage resulting in minimal impact on the gut microbiota, and the selection and emergence of resistance following the administration to patients, unlike other anti-Wolbachia based broad spectrum antibiotic treatments. Furthermore, it has a faster kill rate compared to other known antibiotics tested against Wolbachia in vitro suggesting that the time-frame for treatment delivery could be fewer than 7 days.

This study presents AWZ1066S as a candidate molecule for depleting Wolbachia, warranting further study to improve treatment options, and as such this drug will now enter formal preclinical evaluation. This novel compound provides a unique opportunity to make a significant contribution to communities affected by filariasis especially if the predicted macrofilaricidal effect can be confirmed in clinical trials.  These alternative strategies are needed urgently to reach the goal of onchocerciasis and lymphatic filariasis elimination.

The starting point for the work emerged from screening activities of the A∙WOL programme funded through the Bill and Melinda Gates Foundation and directed by LSTM’s Professor Mark Taylor. He said: “The anti-Wolbachia strategy has proved to be a paradigm changing therapeutic approach to treatment.  The repurposing of drugs already licenced and the discovery of new compounds through screening during the 10 years of A∙WOL’s initial work has been taken up as an alternative strategy where MDA is compromised. The further development of AWZ1066S represents another step forward in bringing relief to many millions of people.”

The paper ‘AWZ1066S, a highly specific anti-Wolbachia drug candidate for a short-course treatment of filariasis’ is published in the Proceedings of the National Academy of Sciences [DOI: 10.1073/pnas.1816585116]