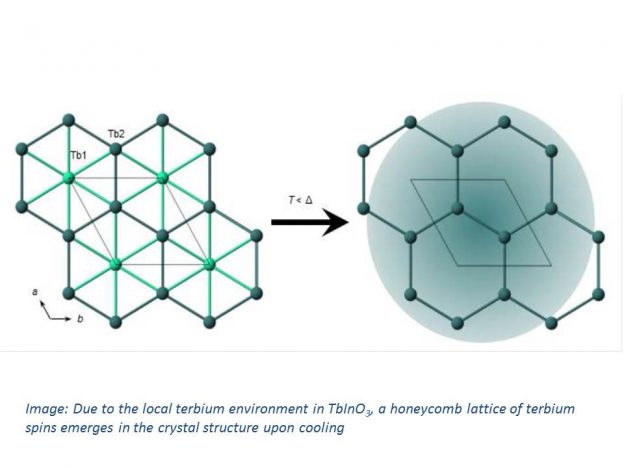 An international research team led by the University of Liverpool and McMaster University has made a significant breakthrough in the search for new states of matter.

In a study published in the journal Nature Physics, researchers show that the perovskite-related metal oxide, TbInO3, exhibits a quantum spin liquid state, a long-sought-after and unusual state of matter.

Using cutting-edge experimental technologies, including inelastic neutron scattering and muon spectroscopy, researchers discovered that the exotic quantum state in TbInO3 emerges from the complexity of the local environment around the magnetic ions in the material, in this case, of the rare-earth element terbium.

The discovery came as a surprise to the team as TbInO3 is a material not expected to display such unusual magnetic behaviour based on its crystal structure.

The quantum spin liquid state was theoretically proposed over forty years ago by the Nobel laureate Philip Anderson. In quantum spin liquids, magnetic moments behave like a liquid and do not freeze or order even at absolute zero, giving rise to several extraordinary materials properties.

The materialisation of quantum spin liquids is still widely contested. As such, the discovery and exploration of new materials that may host this state of matter are active areas of advanced materials research and have potential applications in the development of quantum computing.

Dr Lucy Clark, from the University’s Materials Innovation Factory who leads a programme of quantum materials research, said: “It has taken us several years of hard work and experiments to reach this point in our understanding of TbInO3.”

“When studying intricate quantum states of matter like the quantum spin liquid, carrying out one experiment often raises more questions than it can answer. In the case of TbInO3, however, the physics is particularly rich, and so we were especially driven to persevere. Our study shows that TbInO3 is a fascinating magnetic material, and one most likely to have many more intriguing properties for us yet to uncover.”

“None of this work would have been possible without the collaboration of our colleagues at the world-leading central facilities at the Oak Ridge National Laboratory and the ISIS Facility at the Rutherford Appleton Laboratory, where a large portion of our experiments was conducted. Both of these facilities produce particles – in particular, neutrons and muons – that we can use to probe the atomic structure and properties of materials to reveal the nature of new phases, such as the quantum spin liquid.”

Professor Bruce Gaulin, Director of the Brockhouse Institute for Materials Research at McMaster University, said: “This material appears deceptively simple, with terbium spins decorating a two-dimensional, triangular architecture. But with the full complement of modern experimental techniques at our disposal, the low-temperature magnetism of this structure, based on two distinct terbium environments, exhibits an altogether exotic quantum disordered state of matter – an unexpected and exciting result.”

Dr Lucy Clark added: “The key to the success of the project was the strong and enduring international collaboration, including the group led by Prof Sang-Wook Cheong, Director of the Center for Quantum Materials Synthesis at Rutgers University.”

The paper `Two-dimensional spin liquid behaviour in the triangular-honeycomb antiferromagnet TbInO3’ is published in Nature Physics at 16.00 GMT on Monday, 21 January 2019.

The University of Liverpool’s Materials Innovation Factory is an £81 million project dedicated to the research and development of advanced materials.

The University of Liverpool is pioneering the discovery of advanced materials, with a strong expertise in materials chemistry and through techniques underpinned by automation, robotics and digital capabilities. Research in this field has applications in industrial manufacturing, healthcare, clean and affordable energy and consumer products and is vital for the future of sustainable manufacturing for industry. To find out more, visit the advanced materials research web pages.