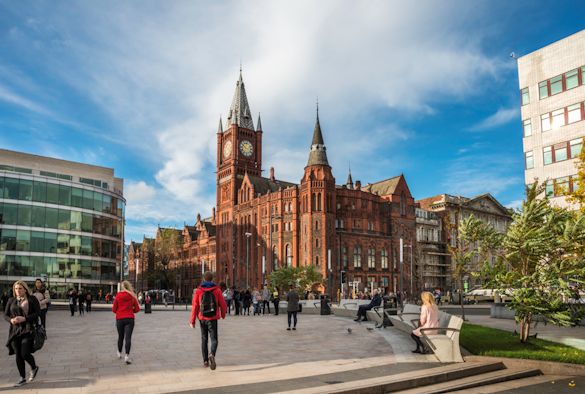 The University of Liverpool has reaffirmed its commitment to the Liverpool City Region by pledging to put the economy and quality of life in the local community top of its list of priorities.

Liverpool joins 30 other institutions – which include many of the best-known names in higher education – in committing to produce a “Civic University Agreement” in partnership with local government and other major institutions.

The new agreement is a key recommendation in a report published today by the Civic University Commission set up by the UPP Foundation and chaired by the former Head of the Civil Service, Lord Kerslake.

The report sets out how universities have the capability, opportunity and responsibility to support the places where they are based to solve some of their most pressing and major problems. These issues range from helping local business adapt to technological change, to boosting the health of local people, improving education for school pupils and adult learners, and training and developing new civic leaders in every field from politics to the arts.

The University of Liverpool has a proud and long-established track record of civic engagement, which is set to be celebrated in an upcoming report. Authored by Professor Dinah Birch, Pro-Vice-Chancellor for Cultural Engagement and Professor Michael Parkinson, Associate Pro Vice Chancellor for Civic Engagement, ‘Celebrating the University of Liverpool’s contribution to the Liverpool City Region’ will demonstrate the substantial and diverse contribution made to the region’s economy, public health, employment, innovation and culture and heritage.

Professor Michael Parkinson said: “We welcome this national proposal to develop Civic University Agreements. We at University of Liverpool have been doing such work for many years. The Agreement that we now plan to develop with partners will allow us to build upon and do even more of this important work in future.”

Professor Dinah Birch said: “Our new report identifies the very many ways in which staff and students at the University of Liverpool already contribute to the health, well-being and economic success of Liverpool City Region. We are delighted that the new Civic University Agreement recognises the  value of this work and encourages its future development.”

Commenting on the Civic University Agreement Lord Kerslake said: “The deep economic and social changes that are happening in Britain today have, alongside Brexit, made the civic role of universities even more vital to the places they are located in.

“The civic universities of the Victorian era were founded as expressions of civic pride, and as a way of sharing knowledge and opportunity at a time of rapid change. We are now entering a new industrial revolution when it will be even more vital that knowledge is accessible in as many communities as possible.

“It is not just people outside university grounds who will benefit. Universities are under unprecedented challenge and need to find a broader base of support. Universities need to be part of a community which is engaged, supportive and shares objectives.”