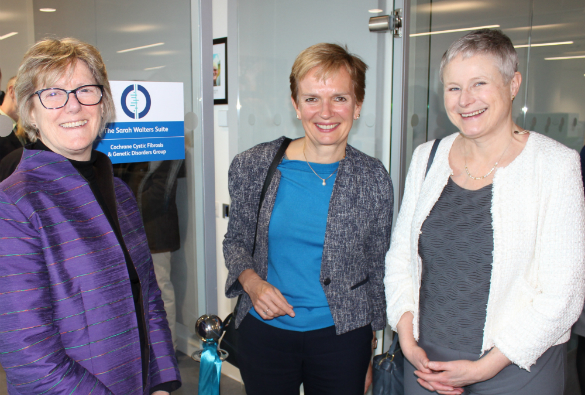 The Cochrane Cystic Fibrosis and Genetic Disorders Group’s new editorial office has been officially opened at Alder Hey’s Institute in the Park.

The University of Liverpool and Alder Hey Children’s Hospital have hosted the Cochrane Group, which produces systematic reviews of evidence for treating cystic fibrosis and other genetic disorders, since it was formed in 1995. The new office was supported by a £75,000 grant to the University from the Cystic Fibrosis Trust and is named in honour of Dr Sarah Walters, one of the founding editors of the Cochrane Group, who died in 2018. Dr Walters was also the first person in the UK with Cystic Fibrosis to qualify as a doctor.

The ‘Sarah Walters Suite’ was officially opened by Dr Walters’ widower, Stephen Briggs on Monday, 11 February. He was joined by England’s Chief Medical Officer, Professor Dame Sally Davies, Professor Rosalind Smyth (Director of The Institute of Child Health at UCL), Professor Deborah Ashby (Director of the Institute of Public Health, Imperial), Professor Kevin Southern (Deputy Head of Women’s and Children’s Health, Liverpool) and Professor Alan Smyth (Nottingham), who are all either current or former editors of the Cochrane Group.

Speaking at the event, Mr Briggs recounted his wife’s inspiring career in medicine and her commitment to the Cochrane team, as well as her myriad interests outside of medicine. Dame Sally also spoke about her memories of joining the Cochrane Group as a haemoglobinopathy editor in the 1990s and reinforced the importance of an evidence-based approach to healthcare.

Co-ordinating Editor, Professor Alan Smyth said: “Our thanks go to the Cystic Fibrosis Trust for providing financial support for the Sarah Walters Suite. The Trust has consistently championed the importance of the work of our Cochrane Group and its impact on evidence-based practice. I firmly believe that our partnership has provided better care for people with cystic fibrosis in the UK.”

There are 53 Cochrane Groups covering a wide range of worldwide, and the University of Liverpool is proud to host four: the Cystic Fibrosis and Genetic Disorders Group, the Infectious Disease Group, the Epilepsy Group and the Pregnancy and Childbirth Group. Cochrane Reviews are published on the Cochrane Library, a collection of databases that contain different types of high-quality, independent evidence to inform healthcare decision-making. 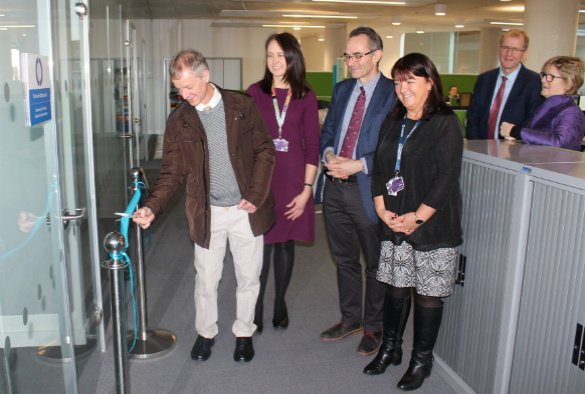