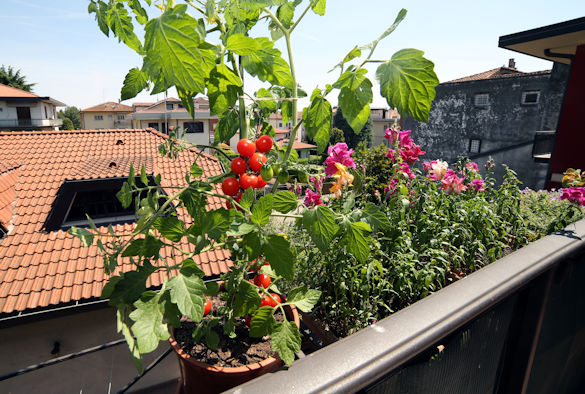 Could we transform UK food production by radically upscaling fruit and veg growing in our towns and cities?

A new £800,000 study, involving researchers from the University of Liverpool, Lancaster University and Cranfield University, has been launched to examine urban agriculture makes us, and our environment, healthier.

Stage one will look at how much, what and where we can grow, bringing together data around current land use and climate suitability for growing certain crops.

A cross sectional survey will also explore the relationship between urban growing and dietary choices. For example ‘are people more likely to eat fruit and vegetables if they can see them growing or are involved in growing them? And ‘how does access to green and growing space affect people’s stress levels?’

Dr Jess Davies, a lecturer in sustainability at the Lancaster Environment Centre and principal investigator on the project, said: “With a big growth in urban populations projected, there’s a lot of talk about the potential of urban agriculture. Previous studies have suggested that the UK could be an urban agriculture hot spot, but there are huge gaps in our knowledge about how much we could produce, and the impact on our health, our communities and our ecosystems.

“We have a food system where people are disconnected from the food they eat. There is a lot of research on high tech urban agriculture options, but this hasn’t become a widespread reality yet. There is a community-driven bottom-up approach to growing food that is going on in our cities, but it’s currently assumed that this can’t provide food at the scale required.

“But what if we really went for it in the UK and used all the available urban space: everything from high tech horticulture and vertical or rooftop growing, to edible corridors and recreation grounds and turning back gardens over to fruit and veg growing? How much food could we produce and what impact would that have on our health and our ecosystems?”

Dr Charlotte Hardman, a senior lecturer at the University of Liverpool who is leading on the psychological elements of the project, said: “We know that stress is a major driver of poor dietary choices, and research shows that access to nature and green spaces reduces stress and improves wellbeing. So if we were to radically upscale urban growing in cities would that be associated with better wellbeing and healthier dietary choices?”

Dr Ling Lui from the Pentland Centre for Sustainability in Business at Lancaster University, said: “We are also interested in exploring the different business models and supply chain possibilities that could make this happen. For instance is there a model around letting out small parts of your gardens, or pocket orchards, where people grow and harvest the products with you?”

Providing an evidence base

Dr Sofia Kourmpetli, from Cranfield University who will lead the collection and analysis of plant and soil samples, said: “We will compare fruit and veg from existing urban growing schemes with crops grown conventionally in the nearby countryside as well as imported produce found on our supermarket shelves. How do these compare in terms of nutritional quality? Are there any health safety risks in terms of contaminants, such as pesticides and heavy metals? These are the sort of questions that we will try to address.”

A series of scenarios will then be developed for how the two areas could be rurbanised, with input from local planners and people involved in public health, food supply chains and growing projects, These scenarios will be used in virtual reality experiments to determine whether living near where food is grown effects people’s eating habits.

Dr Davies added: “The ultimate aim is to produce an evidence base for researchers and policy makers on the potential and impact of radical rurbanisation, and a Rurban Roadmap on how the transformation could take place.”