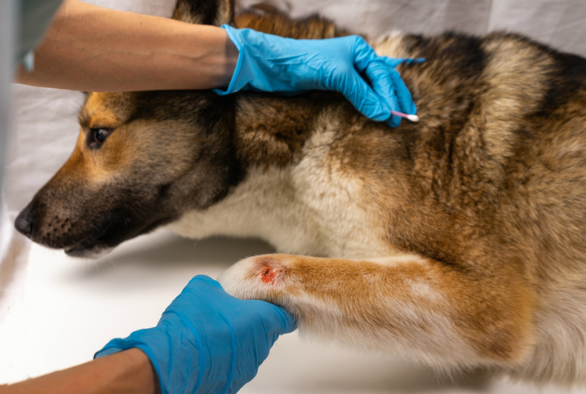 Bacteria that are resistant to a class of powerful ‘last resort’ antibiotics – carbapenems – have been recently reported in a dog for the first time in the UK.

In a study published in the Journal of Antimicrobial Chemotherapy, an Escherichia coli isolate cultured from a wound in a springer spaniel was found to harbour a known carbapenem resistance gene, along with resistance genes for other commonly-used antibiotics, such as cephalosporins.

“Worldwide there are very few reports of carbapenem-resistant isolates in pets and although the prevalence identified in this study was low (0.5%), it was still surprising,” says Dr Dorina Timofte, who oversaw the study at the University of Liverpool’s Institute of Veterinary Science.

“Carbapenems are not authorised for use in EU or UK companion animals, but these findings are worrying due to the close contact between household pets and people which may allow bacteria to transfer between the species. Although epidemiological data was not available for us to determine the origin of this carbapenem-resistant isolate, the similarity of its genetic background with that of human isolates carrying the same resistance genes here in the UK suggests that it may indeed be of human origin.”

“Larger, systematic and prospective studies are now needed to identify the occurrence of carbapenem-resistance in companion animals, which we hope to address in future projects.”

The work, which was carried out in collaboration with the University of Oxford, studied bacterial isolates cultured from clinical specimens submitted to one UK diagnostic laboratory receiving specimens from 34 UK veterinary practices between September 2015 and December 2016.

The researchers say that the ‘surprise’ finding highlights the need for routine laboratory detection of carbapenem resistance in companion animals isolates and improved antimicrobial stewardship in veterinary practice.

Both the WHO and UK strategies for tackling antimicrobial resistance have shown that there is a need for increased access to surveillance data as this can support help policy-makers to revise the recommendations for combating AMR.