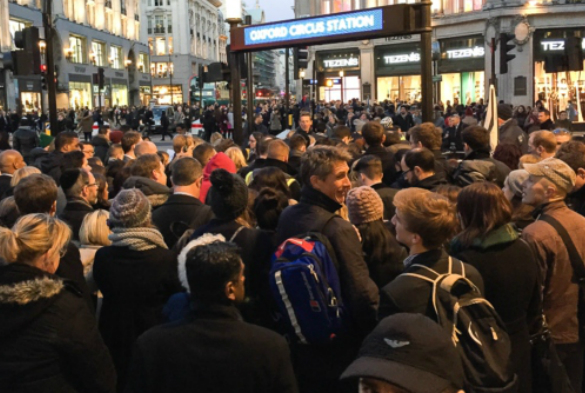 European policy-makers have given Mrs May the option to push her 585-page withdrawal agreement through Parliament for the third time (!!!) around or decide what to do with Brexit by the 12th of April. In fact, the ‪EU’s decision to allow Mrs May to ‘sort out’ Brexit by the 12th of April is largely down to economic considerations. On the one hand, Mrs May realised (?) that she has to ‘join forces’ with MPs at home because no-deal Brexit has the potential of triggering a huge negative economic shock to the British economy. The no-deal option could put nearly 20 per cent of British jobs at risk, which will derail the UK economy, currently estimated to grow by only 1.2 per cent in 2019; its worst performance since the financial crisis.

On the other hand, the ‘willingness’ of EU politicians to give Mrs May another chance has also to do with the potential risk of grim financial consequences of no-deal Brexit for the EU economy. The reality is that EU banks are significantly exposed to British private and public debt. In fact, according to Bank of International Settlements data, the exposure to British debt is as high as 65.56 per cent of worldwide exposure for Irish Banks, 25.19 per cent for Spanish Banks, 13.21 per cent for German Banks and 8.77 per cent for French Banks. Therefore, not a good time for EU policymakers to risk an adverse shock to the UK economy which, in turn, has the potential of also putting pressure on the EU banking system. Not a good time, at least until April, the 12th…

In the meantime, this never-ending Brexit saga has taken its toll on the international credibility of the UK economy. In fact, sterling, clearly the most precious measure of international confidence in the UK economy, has sadly become a hostage to Brexit-related policy uncertainty and will continue to be so as we are moving closer to a ‘cliff-edge’ Brexit scenario. To fix ideas, Figure 1, which tracks sterling movements since 2014, shows a massive negative impact (correlation is as high as -0.60) of policy-related uncertainty (measured by discussion of policy uncertainty in 11 UK newspapers) on the sterling currency. 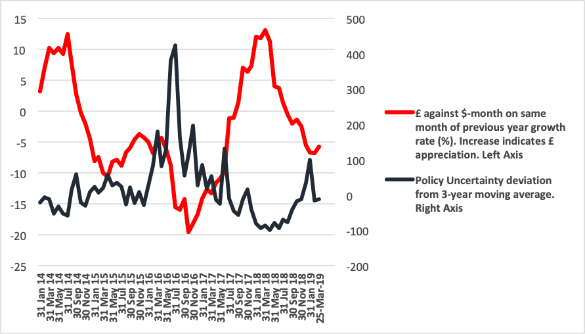 From Figure 1, uncertainty hikes trigger big sterling falls. For instance, policy uncertainty went ‘through the roof’ immediately after the referendum. Uncertainty declined after Mrs May triggered Article 50 (in March 2017), which forced her to engage in meaningful negotiations with her EU partners. Repeated (twice so far) rejection by the Parliament of her 585-page Brexit deal has, nevertheless, pushed up uncertainty.

The main point is that every time uncertainty rises, sterling takes a hit. This matters for at least three economic reasons. First, a lower exchange rate puts upward pressure on Britain’s cost of living through imported inflation and therefore makes the life of Bank of England policymakers quite difficult. This is because Bank of England officials are forced to consider interest rate hikes to combat inflationary pressures at the very time when Brexit-related policy uncertainty is undermining business investments and economic activity. In other words, the prospect of a higher cost of living limits the ability of monetary policy-makers to counteract the adverse economic impact of Brexit uncertainty through effective interest rate cuts. Second, the lower exchange rate reflects unwillingness of international investors to cast a vote of confidence in the UK economy through job-enhancing investments. Third, British companies are themselves consumed with the struggle of hedging against a highly volatile sterling rate at the expense of thinking about productivity-enhanced investments.

What is the possible way forward? Mrs May could opt for an extension of up to nine months. This will give her time to bring her Brexit deal to the public vote; recall that it takes some 22 weeks for a new referendum to be held. In my view, the meaningful strategy is to give the public the option to decide between May’s deal and the existing status quo. The no-deal option, which the overwhelming majority considers as the most harmful/least desirable option should not be a referendum option. In fact, would you offer the public the no-deal option, which both British businesses and trade unions see as catastrophic? In any case, I am against ‘multiple choice’ referendum questions. In fact, I am very sceptical of a voting procedure which will deliver a ‘valid’ outcome based on a potentially elaborate mathematical algorithm…

In the meantime, we (UK academics) are forced to forget what we used to teach our students in financial economics. This is because policy uncertainty has overtaken economic fundamentals (such as interest rate differentials or GDP growth differentials between the UK and the rest of the world) in affecting and indeed driving down investor confidence in the sterling currency. Quite an achievement for Britain’s political establishment…

P.S.: Sterling briefly went up by 0.3 per cent on ‘breaking news‘ that backbencher Jacob Rees-Mogg hinted support for Mrs May’s deal. Which textbook would be treating this piece of news as ‘economic fundamentals’?

This article also appears on the LSE Business Review blog.

Featured image by Andreas Kollmorgen, under a CC-BY-2.0 licence