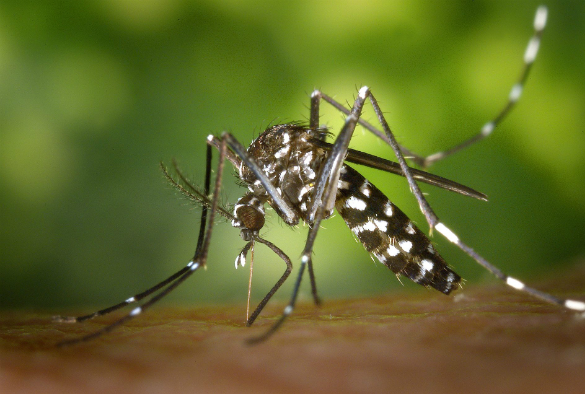 Recent research has shown that the Asian tiger mosquito, which is able to transmit diseases such as dengue and Zika, could become established over almost all of England and Wales by the 2060s.

The study, published in the Journal of the Royal Society Interface, examined the UK’s suitability for the Asian tiger mosquito (Aedes albopictus) under current and future climate scenarios. The invasive species has already established itself in Europe, and has long-lasting and drought-resistant eggs that can be accidentally transported over long distances by car tyres or in plant pots. The eggs can undergo what is known as a diapause, where development of the eggs is suspended in unfavourable conditions, allowing them to survive the colder winters of Europe and the UK. Having caused outbreaks of dengue and chikungunya in Europe already, understanding whether this mosquito could survive in the UK is an important public health concern.

Alarmingly, eggs from the mosquito have already been discovered in the UK. Lead author on the study and PhD student at the Institute of Infection and Global Health, Sören Metelmann said: “Whether or not the mosquito could actually become established in the UK is assessed by analysing the climatic conditions with mathematical models. For now, only some small areas in south-east England seem to be suitable but future scenarios suggest that the Asian tiger mosquito could become established over almost all of England and Wales.”

The mathematical model used in the study is novel in its inclusion of the diurnal temperature range (DTR), which is the difference between the maximum mid-day temperature and the minimum night-time temperature and has been shown to significantly affect the life cycle of the mosquito.

The study goes on to recommend future stringent vector surveillance in southern UK ports and high importation risk areas along motorways, to monitor potential establishment of the mosquito in the UK. It also recommends human and veterinary health services should get prepared to deal with pathogens potentially transmitted by the mosquito in warm summers.