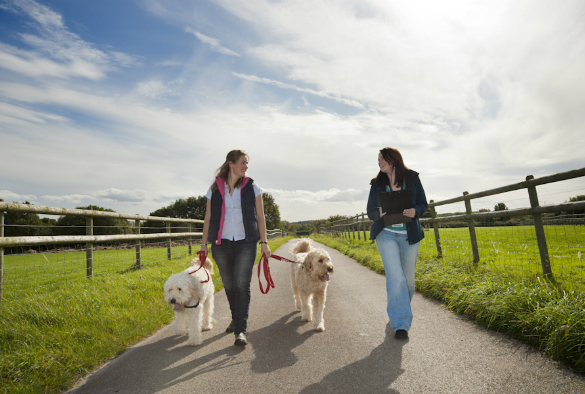 The findings, which are published today in Scientific Reports, highlight the role that dogs may have in helping to keep humans healthy.

It is recommended that adults should do at least 150 minutes of moderate-to-vigorous physical activity per week. However, this is achieved by only 66% of men and 58% of women in England and fewer than 50% of adults in the USA. Dog ownership is expected to encourage physical activity, but it has been unclear whether this effect occurs in all members of a dog-owning household, or whether dog walking replaces other forms of exercise.

Dr Carri Westgarth and colleagues assessed the self-reported physical activity of 385 households in West Cheshire, UK (191 dog owning adults, 455 non-dog owning adults and 46 children). Dog owners walk more frequently and for longer periods than non-dog owners, the results show. Moreover, dog walking in this population is undertaken in addition to, and not instead of, other physical activities.

The effects of dog ownership on physical activity levels in the UK reported in the present study are greater than those reported in previous studies of North American and Australian populations. For example, 64% of dog owners in the new UK study reported that they walk with their dogs for at least 150 minutes per week, compared with only 27% in a USA study.

The study suggests that these discrepancies may be due to social and climatic differences, such as a higher proportion of outdoor (and self-exercised) dogs in the USA and Australia than in the UK

Dr Westgarth said: “Our findings provide support for the role of pet dogs in promoting and maintaining positive health behaviours such as walking. Without dogs, it is likely that population physical activity levels would be much lower. The health benefits of dog ownership should be recognised and facilitated through the provision of dog-supportive walking environments and pet-friendly housing; failure of planning and policy makers to provide these may significantly damage population levels of physical activity.”

The study was carried out in collaboration with Lancaster University, Liverpool John Moores University and the University of Western Australia.

Dog owners are more likely to meet physical activity guidelines than people without a dog: An investigation of the association between dog ownership and physical activity levels in a UK community, Scientific Reports, DOI:10.1038/s41598-019-41254-6