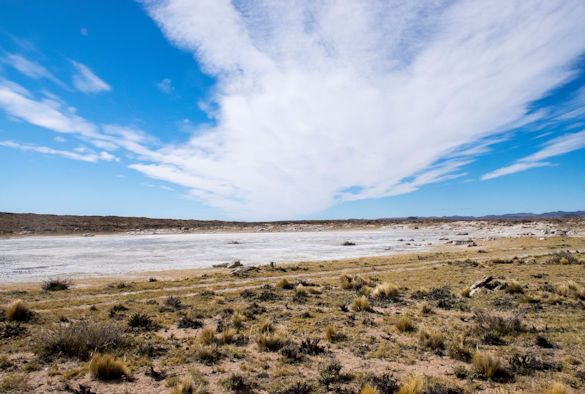 Ben Hanford, a PhD student in the geomagnetism research group in the Department of Earth, Ocean and Ecological Sciences, visited Argentina as part of his fieldwork:

Of late, my quest to determine the strength of the Earth’s magnetic field during the Triassic has taken me across central Argentina, covering almost three thousand kilometres by car via six provinces. A true indication of how desperate I am to find igneous rocks from this period.

Accompanied by my colleague from the Geomagnetism lab, Annique van der Boon, I met up with Augusto Rapalini, a palaeomagnetist from the University of Buenos Aires and our point of contact in Argentina.

Our first destination was a twelve hour drive west of the capital in the surrounding area of San Rafael. We went equipped with an expert on the local geology, Mariana Monti of the National University of La Plata, and technician turned driving maestro Gabriel. The journey was long and arduous taking a twist and a turn, at most, with an obstacle to overcome on the way.

A solitary hill, appearing on the horizon as a towering structure of geological engineering in comparison to its surroundings. After enduring this mostly barren, featureless drive the site of our lodgings was most welcome.

The next six days were spent in the presence of the infinitely more scenic Cañón del Atuel, a genuine wonder carved out by elemental power, and perhaps a unique example of the bending arts of old.

Mostly the days passed by with little complication. We were able to reach most of our desired sites with ease and collect nine priceless cores from whichever unlucky lithology was destined to be the victim of Augusto’s age old drilling form. 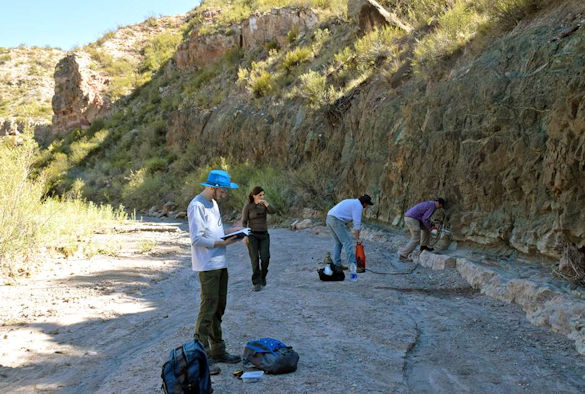 The only inconvenience that we encountered was the task of discovering the owners of the keys to locked passages that blocked our intended route. When it came to such matters Mariana showed her expertise to be in more than just the local geology but also the local people, shrewdly negotiating with landowners. Morale was high.

This pattern of events was not set to continue. The plan had always been for Mariana to depart early, however none of us could have envisaged how difficult a farewell this was to be. We were losing a vital member and, although it was not spoken, it was apparent that each of us was wondering if we would be able to continue with the same level of success.

We had prepared the best that we could for what was to be our last extensive sampling site of the first leg of our trip, Puesto Viejo. Mariana had chosen the location, sourced the required key, and enlisted the help of a local puesto owner and his tamed beasts to be our guide and transport our cargo. At first the going was easy and the novelty of our new editions was a welcome source of joy.

Several kilometres of relentless trekking, in what was fast becoming ferocious heat, quickly changed this. Each step became more difficult than the last but the end of the road was in sight, not too much further. I laugh now at this naivety for although the path had stopped we had not.

This was no issue for our guide towering above the overgrowth, his horse barely flinching as it moved, but for us so began the task of navigating this unforgiving landscape. The plants here were designed to survive the harsh climate. It was soon apparent that the only solution was to choose the route that would inflict the least pain, but never no pain. 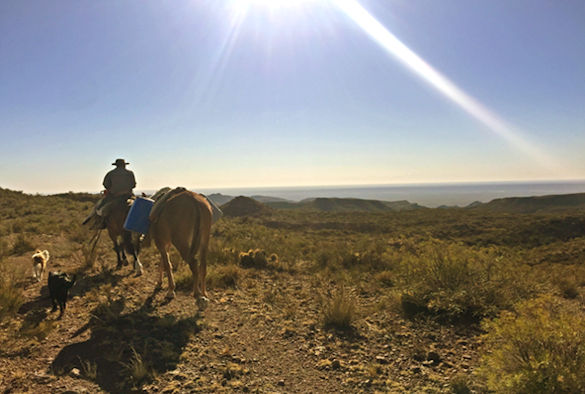 The terrain worsened and soon the equines began to struggle and our guide abandoned us. I began to question the motives of the planning behind this, it felt like a set up. A lesson perhaps for following blindly, or a cunning trick much like those deployed by Barney Harwood and his team after the turn of the millennium. There was no time to dwell on these thoughts. We had to continue, for science.

After scrambling down its perilous banks we arrived at the base of a steep gorge. We were now standing on a huge volume of exposed ignimbrite just asking to be drilled but it would have to wait for that was not why we had journeyed here. Onward we went down the dry river bed, save for a few pools of stagnant water, until at last we saw it. At once I felt reborn, no more did I feel the pain from the road that had taken me there for it had all been worth it. We would finally be able to drill the infamous andesitic basalts that we had heard so much about and that was as great a reward as any of us could have wished for.

The trek back came with more difficulties, we no longer had a guide, were bearing the weight of our swag, and down to our last rations of water, but somehow it seemed like less of a challenge. It would take a lot more now to dampen our spirits for we had achieved great things. We were unbeatable, surely the rest of our journey was to be a success.

Find out more about the activities of the geogmagnetism research group by following them on twitter or instagram. 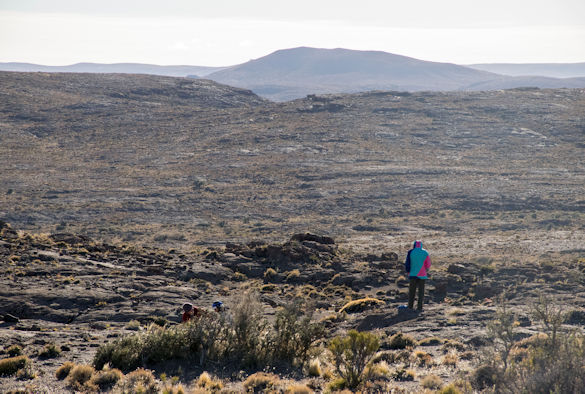