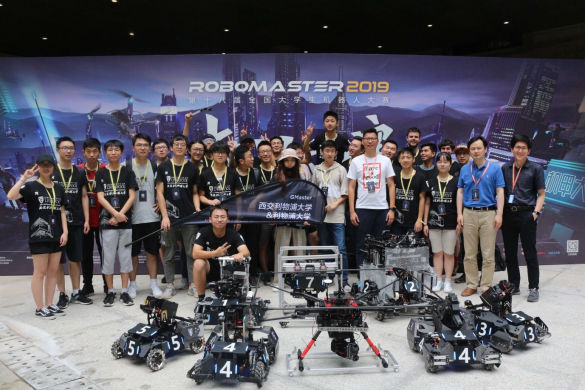 A group of students from the University of Liverpool and XJTLU have teamed up to compete in the RoboMaster International Robotics Competition held in Shenzhen, China.

The joint team of 30 students have been collaborating over the past year and with their creative thinking and engineering talent have designed six different robots for the competition. RoboMaster requires teams to design and build next-generation robots to compete for supremacy on a battlefield the size of a basketball court.

More than 170 universities participated in the competition which was viewed online by nearly 2 million people across the globe.

This is the first year that the University has participated in Robomaster and the team includes  students and academics from the School of Electrical Engineering, Computer Science, Physics and Maths. The University of Liverpoool & XJTLU team has done very well competing against veteran teams and were awarded 3rd Prize in the International Regional Competition in August.

Christopher Rowe, a first-year undergraduate student, said: “The RoboMaster competition provides an incredible opportunity to demonstrate and develop skills on an international stage. Competing against some of the world’s best students and making new friends from across the world is a rare and invaluable experience that should not be missed!”

Dr. Tu the UoL Team Coordinator further commented that the competition is an excellent opportunity for students to develop critical programming and engineering skills and helps broaden global perspectives and employment opportunities.

RoboMaster is the world’s largest university-level annual robotics competition for aspiring STEM students and is sponsored by DJI, a global leader in civilian drones and aerial imaging technology.

This joint activity in robotics training and collaboration is part of the Faculty of Science and Engineering’s Educational Enhancement Leadership Project. Team members would like to thank the Study Abroad Team, the Department of Electrical Engineering, Electronics and Computer Science and XJTLU for their support.