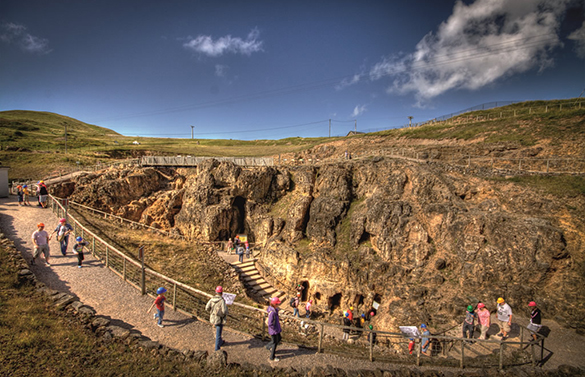 Alan Williams is an Honorary Research Fellow in the University of Liverpool’s Department of Archaeology, Classics and Egyptology

Britain’s wrestling with the scope of its future trade links with Europe may seem a very modern phenomenon. But early trade between Britain and Europe was much more widespread than previously thought. Our new research reveals remarkable evidence of a copper-mining bonanza in Wales 3,600 years ago that was so productive that the metal reached France, the Netherlands, Germany, Denmark and Sweden.

Understanding Britain during the Bronze Age (c.2,400-800BC) relies entirely on archaeological research. During this period, agricultural communities combined stock rearing with cereal cultivation. While they constructed numerous circular monuments, evidence for settlement is generally scarce before 1,500BC and on a small scale. Despite this somewhat insular vision of scattered farming communities, there is growing evidence of strong trade or exchange links with continental Europe. What the nature of these contacts were, in a pre-monetary economy, remain a matter of debate.

Copper objects (daggers, axes) first appeared in Britain around 2,400BC and were associated with people arriving from continental Europe. According to recent DNA studies, these arrivals eventually replaced most of the preexisting Neolithic population over the following centuries.

Britain’s copper supplies initially came mostly from southwest Ireland – Ross Island. As this source became exhausted, around 1,900BC, however, small mines opened in Wales and central northwest England. Production in these mines was relatively small, and had to be supplemented with metal from the continent.

This all radically changed around 1,700BC, with the discovery of the exceptionally rich copper ores of the Great Orme mine on the north Wales coast. This was one of the largest Bronze Age copper mines in Europe. Probably in response to the sheer richness and easily-worked nature of the Great Orme ores, all the other copper mines in Britain had closed by 1,600BC. The Great Orme mine met an increasing demand for metalwork of all types (axes, spearheads, rapiers).

Until recently, it was thought that the Great Orme mine was only large in size due to nearly a thousand years of small-scale seasonal working. This assertion was based on claims that the mine only produced high purity copper, which is uncommon in the artefacts of that period.

But our new research, which combines archaeological and geological expertise with the latest scientific analytical techniques, reveals a radically different picture. Extensive sampling of ores throughout the kilometres of Bronze Age workings, along with associated bronze tool fragments and copper from a nearby smelting site, have allowed “fingerprinting” of the mine metal based on chemical impurities and isotopic properties.

The surprising results revealed a distinctive metal rich in nickel and arsenic impurities and, combined with its isotopic “signature”, closely matched the metal type that dominated Britain’s copper supply for a 200-year period (c.1600-1400BC) in the Bronze Age. Remarkably, this metal is also found in bronze artefacts across parts of Europe, stretching from Brittany to the Baltic.

This very extensive distribution suggests a large-scale mining operation (in Bronze Age terms), with a full-time mining community possibly supported or controlled by farming communities in the adjacent agriculturally richer area of northeast Wales, where there are signs of wealth and hierarchy in grave goods. Geological estimates suggest that several hundred tons of copper metal were produced. This would have been enough to produce thousands of bronze tools or weapons every year, equivalent to at least half a million objects in the 200-year period.

When the mining boom turned to bust by around 1,400BC, the distinctive Great Orme metal gradually disappears. This major decline was probably due to the exhaustion of the richly mineralised central area of the mine that corresponds today to an impressive manmade underground cavern and an extensive deep area of surface mining (possibly a collapsed cavern). Both of these can be seen at the mine visitor centre. The bonanza was followed by a twilight period of many centuries, when all that remained were narrow ore veins that required a huge effort for a small output and probably only satisfied local needs.

Tracing the metal from the extraordinary 200-year copper boom across Britain and into continental Europe suggests that Britain was much more integrated into European Bronze Age trade networks than had previously been thought. This is reinforced by fascinating new isotopic evidence from other researchers suggesting that the copper replacing that from Great Orme may have come from the Eastern Italian Alps, which would further extend the long-distance trade networks.

The next big challenge is to understand how important the exceptionally rich British tin deposits in Cornwall and Devon were in enabling the complete changeover from copper to bronze (10% tin, 90% copper), not only in Britain (c. 2,100BC) but also across Europe and beyond, where tin is very scarce. Researchers in Germany recently suggested a link between Bronze Age Israeli tin ingots and European tin deposits, rather than Central Asian deposits, and tentatively suggested a source in Cornwall, although much more research is required.

So we now have increasing evidence that Britain’s trade with continental Europe – although currently turbulent – has deep roots that go back several thousand years.