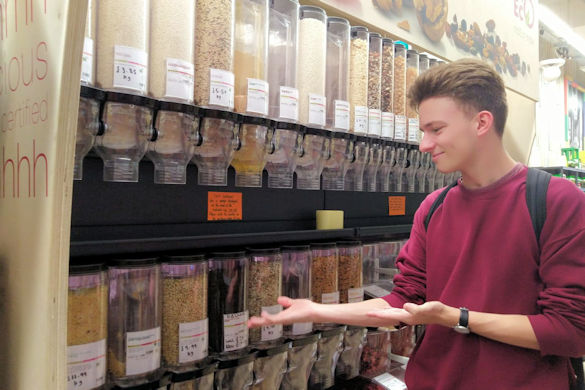 Author William Pearce is a 1st year Economics student at the University of Liverpool.

In celebration of Veganuary, I thought I would try to convince you to make your life ever-so-slightly worse. Yes, that’s right, why not try cutting meat out of your diet? Or, at least, how about reducing it? The same for cheese, for milk, for cream… it is time to say goodbye to joy. Forever.

That’s how I thought it would feel, anyway, when I decided to start eating vegan. Fortunately, it’s not quite like that, especially when you live in a student city like Liverpool that already has a lot of vegans. Being vegan is easier than you think, and in spite of all of the soy products, the joy in my life remains pretty much intact.

Why should I consider becoming a vegan?

That’s a good question, and truthfully, there isn’t really one simple answer. People decide to try out veganism for a range of equally valid reasons; some do it for the environment, some for a healthier lifestyle, and presumably somebody, somewhere, once tried reconstituted soy protein and found it to be so delicious that they were converted based on taste alone!

Personally, I find the environment argument the hardest to ignore. A quick Google search will tell you that animal agriculture is the second largest contributor to our greenhouse gas emissions, and thus a key player in global warming. The meat industry is also fatal for so many living in the poorest areas of the world. Where farms could be sustaining the lives of those that tend to them, they are instead growing crops fed to cattle in order to plump them up ready for slaughter.

If you find yourself asking this question, I suggest doing your own research on the topic. There are many convincing counterarguments, and it is worth reading those too. Do what you think is right, and don’t feel bad about whatever that may be.

The absence of cheap vegan ready meals is understandably worrying. Subtract pre-cooked sandwich meat, 99p chicken mayo’s, even pizza; it starts to feel as if the diet is impossible when you don’t have time on your hands!

There is certainly a perception that in order to ‘do it right’, you almost need to learn a new way of life, a life where you understand what acai bowl and matcha mean. You don’t. The key is to substitute ingredients within meals as opposed to just scrapping previously non-vegan meals entirely.

This can actually make your diet cheaper once you get good at it, and meat/dairy-free alternatives tend to be more versatile. Here are some facts that I wish I could have seen myself before I made the transition:

I have countless more tips that I wish I could share, but those are a good start. Ultimately, veganism does not need to be expensive, and it does not need to be time consuming. My best advice would be to make the meals that you already eat, and just swap out the meat and dairy for substitutes. Exclusively vegan recipes tend to be complicated. Oh, and finally, four slices of seeded bread and a tin of beans equates to all the protein that you need in a day. Make sure you get your protein!

Being vegan in Liverpool

There are plenty of fantastic vegan cafés, restaurants and shops throughout the city, and we will delve into those in a moment. But, it is important to remember that meat-free options are considerably more popular now than they were just a few years ago. You do not need to look that hard to find suitable options. If you still love the taste of meat and can’t stand a bean burger, even Wetherspoons offers an array of fake meats that you should certainly try before you form an opinion. They’re better than you would think.

However, if you are in the mood for a full-on vegan menu, then you chose the right city to live in.

For fast food, Frost Burgers on Bold Street is a delicious and cheap option, offering fake chicken and beef burgers that as are close to the real thing as you’re likely to get. Woo Tan Scran on Lark Lane, an entirely vegan Chinese takeaway, is another fantastic option.

The Egg Café, off Bold Street, is probably a more typical vegan establishment (it’s described as bohemian online, which I am certain is the only adjective used to describe any vegan café). But still, it has a warm atmosphere, a lovely menu, and it’s the perfect place to study.

I would also recommend The Caledonia pub in the city centre. As of 2017 it is fully vegan, and its dog friendly too, so you can guarantee that any animal found in that pub is alive and well.

Just do what you can

Having read everything so far, if you’re still not convinced that you could manage it, or if you’re not sure that you would even want to, that’s absolutely fine.

But if you’re struggling, the best advice I can leave you with is to picture your diet as a spectrum, with entirely non-vegan on one end and totally vegan on the other. There is no law telling you to stick to one extreme or the other. Somebody that avoids all meat and dairy every single day, except for the occasional cocktail sausage on a Monday, still makes 99.9% of the impact that an all-out vegan would.

Perhaps consider only eating meat when you go out for a meal, or once a week at home as a treat. You do not have to go fully vegan to make a difference.