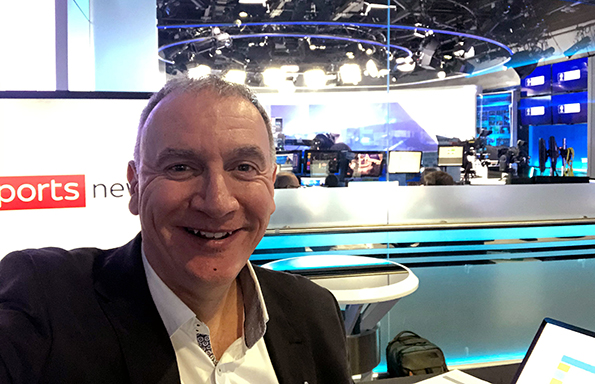 The twitter account of University of Liverpool football finance specialist, Kieran Maguire will be archived in the UK Web Archive at the request of the British Library.

The request will see Kieran’s twitter output held securely in the British Library to ensure it is preserved and remains accessible for future researchers, whether academic or members of the general public.

The UK Web Archive says it collects “only a very limited amount” of social media due to the technical difficulties involved.

Kieran said: “It’s an honour, but also a bit scary.

“It does make me put extra time into trying to ensure accuracy and objectivity in the content of the tweets, which almost exclusively deal with football finance matters.”

Now one of the leading commentators on the money side of the sport, Kieran has amassed an engaged 35,000 following on the platform – activity that helped secure more than 500 media contributions in 2019 alone across print, TV and radio, here in the UK and across the world.

Kieran, who teaches finance and accounting in the University’s Management School, said: “Many media requests come from journalists who follow my account and want extra explanation about issues covered in the tweets.

“As the value of football broadcasting rights, sponsorship deals and prices for tickets and players have risen in recent years, there has been greater demand for analysis and explanation of the decisions made by clubs and their owners.”

Kieran says he is most proud of his output drawing attention to the activities of Shaun Harvey, the English Football League (EFL) Chief Executive who oversaw the demise and eventual expulsion of Bury Football Club earlier this season.

He initiated a ‘Shaun Harvey Appreciation Thread’ – which provided a useful acronym for hashtag purposes – that linked issues affecting fans and clubs during his tenure, helping both to navigate the complex and often opaque world of sports financing and administration.

The activity saw the hashtag trending across the platform.

And while social media invites a tongue in cheek element, much of the work is the result of serious and often laborious research producing output simply not available elsewhere.

An example is Kieran’s full analysis of the total wages paid by every football club during the Premier League era, which “took a lot of collating” but delivered a “final output that was pleasing and visually stimulating”, he said.

Towards the end of last year, Kieran built on his twitter and media work by launching a podcast called The Price of Football with well-known comedian, Kevin Day. He was also nominated in the Online Media of the Year category for the prestigious annual Football Supporters Association (FSA) Awards, eventually missing out to well-backed sports website, The Athletic.

Kieran’s The Price of Football book has just been published, with a second print run already underway after the first soared to the top of Amazon’s best-selling sports list.