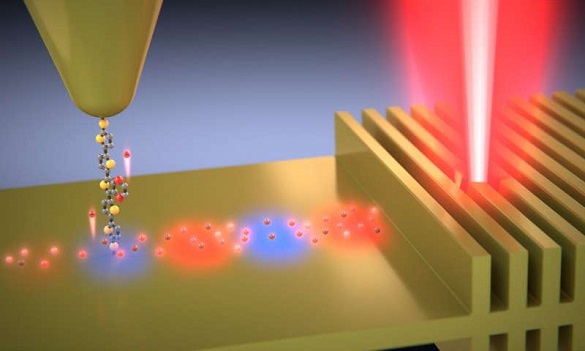 Over nearly two decades, a team of chemists at the University of Liverpool, now led by Richard Nichols, Simon Higgins and Andrea Vezzoli and funded mainly by the Engineering and Physical Sciences Research Council, has perfected methods to make and test tiny electric circuits involving two metals contacting a single molecule at either end.

By making different molecules and testing how their structure affects how they conduct electricity, it’s possible to build up a picture of how individual molecules might one day function in electronic devices, opening possible new avenues to more advanced computer chips. But molecules are smarter than simple wires; their electrical properties respond to their surroundings.

Recently, the Liverpool group found that one particular family of molecules, oligothiophenes, showed greatly increased ability to carry electric current when they interacted with a small molecule called tetracyanothylene (TCNE), in a so-called ‘donor-acceptor’ complex. This could ultimately find application in the development of new types of extremely-sensitive sensor devices, but also in the generation of electricity directly from waste heat.

Now, teams of engineers and physicists led by Vladimir Shalaev at Purdue University, Indiana and Profs. Edgar Meyhofer and Pramod Reddy at the University of Michigan in the US have used the Liverpool molecules in a very innovative and challenging experiment to answer the question: what happens to the electrons when you shine a light on a thin metal film?

The answer to this seemingly abstract question could dramatically affect new technologies like the use of light energy from the sun to drive unfavourable chemical reactions such as turning carbon dioxide back into fuel, or splitting water into hydrogen and oxygen, with semiconductors as the catalyst.

When electrons are confined in a tiny piece of metal, the result can be the generation of enormous electric fields, and these can have big effects. Since tiny metal particles are often used as catalysts in important industrial reactions, it might be possible to get better catalytic performance by illuminating the particles.

Until now, it has been impossible directly to measure these effects, only to model them- and scientists have come up with different models, which do not agree. So an experiment that can measure these effects is crucial to understanding them. In the work described in this paper, light from an infrared laser is used to excite the electrons in a very thin film of metal, and the energy of these electrons is measured by testing how well they can cross one of the Liverpool group’s molecules in a metal – molecule – metal junction device, by comparing results obtained when the laser is on with those obtained when it is off.

By varying the voltage across the device, it’s possible to map the energy spectrum of the excited (or ‘hot’) electrons, and to compare this with predictions from the various theoretical models to see which one works best. It turned out that the best fit was to a model that incorporates energy dependent scattering times. The extra energy of the electrons can be as much as if the metal had been heated to 1100 ˚C even though it is still at room temperature.