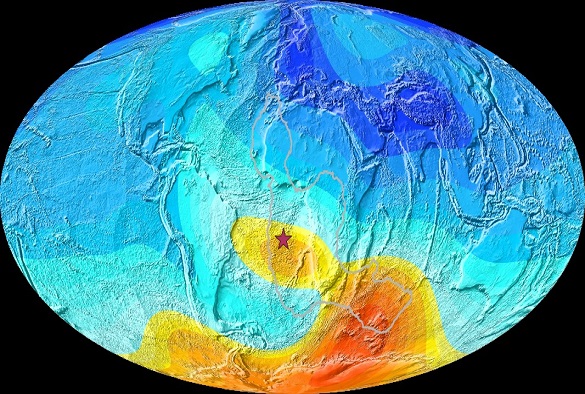 Map of the Earth showing the present-day deviation from expected magnetic field direction. The star is Saint Helena

Research by the University of Liverpool has revealed that strange behaviour of the magnetic field in the South Atlantic region existed as far back as eight to 11 million years ago, suggesting that today’s South Atlantic Anomaly is a recurring feature and unlikely to represent an impending reversal of the Earth’s magnetic field.

The South Atlantic Anomaly is an area characterized by a significant reduction in the strength of Earth’s magnetic field compared with areas at similar geographic latitudes. Here, protection from harmful radiation from space is reduced. The most significant signs of this are technical malfunctions aboard satellites and spacecraft.

In a study published in the Proceedings of the National Academy of Sciences, Liverpool paleomagnetic researchers analysed the record of Earth’s magnetic field which is preserved in igneous rocks from the island Saint Helena which lies in the midst of the South Atlantic Anomaly.

The geomagnetic records from the rocks covering 34 different volcanic eruptions that took place between eight and 11 million years ago revealed that at these occurrences the direction of the magnetic field for St Helena often pointed far from the North pole, just like it does today.

The Earth’s magnetic field, or the geomagnetic field, not only gives us the ability of navigating with a compass, but also protects our atmosphere from charged particles coming from the sun, called solar wind. However, it is not completely stable in strength and direction, both over time and space, and it has the ability to completely flip or reverse itself with substantial implications.

The South Atlantic Anomaly is a topic of debate between scientists in this field. Besides the fact that it causes damages to space technology, it also raises the question of where it comes from and whether it represents the start of the total weakening of the field and a possible upcoming pole reversal.

Lead author of the paper, University of Liverpool PhD student Yael Engbers, said: “Our study provides the first long term analysis of the magnetic field in this region dating back millions of years. It reveals that the anomaly in the magnetic field in the South Atlantic is not a one-off, similar anomalies existed eight to 11 million years ago.

“This is the first time that the irregular behaviour of the geomagnetic field in the South Atlantic region has been shown on such a long timescale. It suggests that the South Atlantic Anomaly is a recurring feature and probably not a sign of an impending reversal.

“It also supports earlier studies that hint towards a link between the South Atlantic Anomaly and anomalous seismic features in the lowermost mantle and the outer core. This brings us closer to linking behaviour of the geomagnetic field directly to features of the Earth’s interior”

The paper `Elevated paleomagnetic dispersion at Saint Helena suggests long-lived anomalous behavior in the South Atlantic’ (doi/10.1073/pnas.2001217117) is published in Proceedings of the National Academy of Sciences.

The research was undertaken by the University of Liverpool’s DEEP (Determining Earth Evolution from Palaeomagnetism) research group and the Geomagnetism Laboratory which are supported by the Leverhulme Trust  and Natural and Environmental Research Council (NERC).