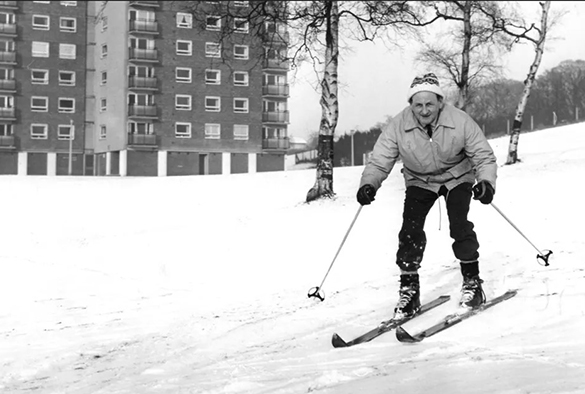 As global temperatures rise, snowy winters could become a thing of the past in much of the UK, according to a recent Met Office analysis. Aside from depriving schoolchildren of the sheer fun of a snow day, climate change could lead the popular imaginary of British winters into uncharted territory.

Throughout the UK’s history, some winters have left more of an impression than others. Bringing icy gales and thick blankets of snow, these winters have remained lodged in the cultural memory. Some fomented despair and unrest, while others seemed to freeze events entirely.

My research helps reveal how the environment and human actions entwine to shape history. By studying weather observations and stories carefully recorded in diaries, letters and newspapers, it’s possible to trace winter’s icy fingerprints on the human drama. Here are three examples of winters which profoundly affected life during pivotal moments in British history.

During the winter of 1794-1795, temperatures struggled to climb above freezing, hovering at a daily average of 0.5°C. January 1795 was the coldest month ever recorded in the Central England Temperature series – the world’s longest-running record based on thermometer readings, drawn from various sites between Bristol, Lancashire and London. Mercury readings that month plummeted to an average of -3.1°C.

Major rivers throughout the UK froze and roads were made impassable by snow. Grain was already scarce thanks to a hot and dry summer in 1794, but Britain was at war with revolutionary France, too, which disrupted imports and raised food prices even higher. The Gentlemen’s Magazine, a popular periodical from the time, warned of “unprecedented inclemency”:

men are awefully [sic] contemplating an extraordinary and rapid succession of momentous events.

Perhaps it was fear of insurrection that inspired charity among Britain’s noblemen. Land agent William Gould’s diary entry for January 21 1795 notes that he was instructed to give money, coal, beef and bread to the hungry around the Duke of Portland’s Welbeck estate in Nottinghamshire. Elsewhere in the county, Reverend Samuel Hopkinson bought peat turf (a kind of fuel) to distribute to the poor on behalf of Earl Fitzwilliam.

Tensions did not subside with the thaw: scarcity and high food prices contributed to bread riots across the country in the following spring. “Times are now alarming”, reported the Clipston Paris Register on May 1 1795.

Picture the classic Victorian Christmas scene. Snow covers the cobbles and candles flicker atop icy lampposts. Whatever you’re imagining, it’s almost certainly a homage to December 1894. Despite arriving in the twilight of Queen Victoria’s reign, the long winter imbues popular depictions of festive periods in the Victorian era – the backdrop to the redemption of Ebeneezer Scrooge.

Church records from Norfolk note that:

The winter of 1894-5 was very long and cold. The frost began the last week in December 1894 and continued without interruption to the end of the third week in February… The ground was covered with snow all the time.

At the Leicester and Rutland Record Office, a notebook recovered from an inspector visiting various schools in Suffolk and Cambridgeshire to monitor lessons reveals snippets of the winter’s frivolities.

At Cowes, there was floating ice in the harbour for a long way… the Severn was skateable a little sooner than the Thames… men rode their bicycles across the latter.

At Linslade School, Market Harborough, one unfortunate pupil ended up

with his tongue frozen to the iron handrails of the entrance steps… It appears the boy was trying the experiment, having read of a similar occurrence at Peterborough.

The winters of 1947 and 1963 linger as some of the most severe that people in the UK have weathered in living memory. But the winter of 1939-1940 was one of the coldest on record, and it arrived as the country anxiously contemplated another war in Europe.

The diary of Mary Elizabeth King charts farming life in Whittington, Staffordshire during this period, which became known as “the phoney war”. Sandwiched between the outbreak of war in autumn 1939 and the Nazi blitzkrieg of spring 1940, King’s commentaries on weather, wartime and the challenges of everyday life provide a sense of calm amid the gathering storm.

The air is so clear, the skies are so high and the scenery shows such erudite beauty in the hoary frost – every bough and branch holds the magic of a fairy touch…

The wintry weather continues throughout Europe. There is snow on Vesuvius… The Russian invaders of Finland have retreated for the time being, owing to severity of weather.

The doors and walls of the house are like clear glass. The rain has frozen on them as it has fallen. The branches of the trees are iced in the same way… There is a height of snow – level two to three feet… Oh – it is a wonderful sight.

The snow lies very hard and solid all around… The Postman came today for the first time since the snowfall, bringing with him a letter from Mercie – She says “People say it is an old-fashioned winter”. I think it is a new-fashioned winter – we have never seen the like of it before…

As Britain’s winters become progressively milder, people may never see the like of 1940 again. But these descriptive accounts and first-hand testimonials unveil the power of climate change over human lifetimes – and hint at the role weather will continue to play in Britain’s future.