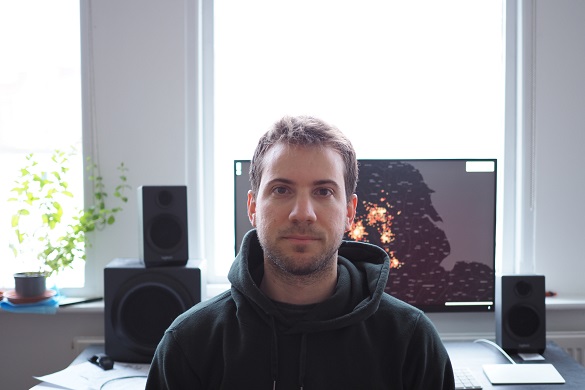 Nikos Patias is a 4th year PhD student at the University’s Geographic Data Science Lab and part of the CDT Data Analytics and Society. His PhD project partner is Ordnance Survey and his supervisors are Dr Francisco Rowe and Dr Dani Arribas-Bel.

Persistent spatial inequalities represent a menace to economic progress, social cohesion and political stability. The UK stands out as one of the most unequal countries in the industrialised world.

The geographical structure and temporal change of neighbourhoods shape local and national patterns of social stability and economic growth by influencing individual wellbeing across the life span, and the social and economic fortunes and prosperity of cities and towns.

Census data plays an essential role in my PhD project. It helps me investigate how local populations evolve over time and consequently unpack long term regional and urban inequalities at the neighbourhood level.

Moreover, Census data can be combined with other data sources to unveil relationships between population and a range of other characteristics such as green space availability, built-up density and property prices.

Such evidence can be helpful to understand the ways urban planning public policy interventions may impact the population composition of neighbourhoods and target the development of more inclusive urban habitats.

My PhD aims to shed some light on the way British neighbourhoods have transformed in terms of their socioeconomic and built environment characteristics and their unequal distribution in urban areas.

In the first part of my PhD, I utilised gridded cell Census data for Great Britain from 1971 to 2011 with 10-year intervals, creating neighbourhood typologies for each Census year.

These typologies were then used to analyse transitions of grid cells between different types of neighbourhoods and define representative trajectories of neighbourhood persistence and change unveiling pathways of socioeconomic progress, decline, persistent affluence and disadvantage.

The results revealed seven prevalent trajectories of neighbourhood change across Great Britain, highlighting the extent of geographic unbalance in the distribution of these trajectories. Socioeconomic progress trajectories have been widespread across British cities. Yet a small handful of cities have concentrated persistent affluent neighbourhoods, and persistent struggling neighbourhoods have prevailed in northern cities.

In the second part of my PhD, I focused on how built environment features such as built-up density, green space availability and walkability are unequally distributed across space and time.

For this work, I drew on a series of unique historical datasets obtained from Ordnance Survey, covering the largest British urban areas over the last 15 years (2001-2016) to develop a set of twelve indicators and a composite Sustainable Urban Development Index to establish the spatial and temporal structure of changes in urban structure of British neighbourhoods.

The results showed that there is a uniform increase in urban structure sustainability of areas in and around city centres and identify that the primary built environment feature driving these improvements was an increase in walkable spaces.

For the last part of my PhD which is work in progress, I focus on understanding what are the key socioeconomic and built environment factors that are associated with ethnic inequalities in England and Wales. In this piece of work, I combined a series of datasets derived from 2001 and 2011 Census, Ordnance Survey and other sources.

Life as a PhD student

Being a member of Geographic Data Science Lab, which is a diverse group of people with a wide variety of scientific interests is one of the best working environments to conduct research as a PhD student.

During my time as a PhD student, I had the chance to get involved in projects beyond my PhD and develop key transferable skills that will help on my future career. In the next few months, I want to finish the writing of my PhD and explore opportunities where applied research can contribute to addressing real life problems.