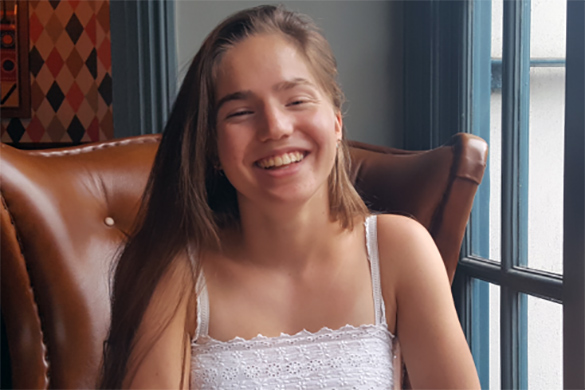 Congratulations to final year MPhys student Cara Hawkins, who together with Dr Laura Corner from the Department of Engineering, recently won the Rutherford Plasma Physics Communications Prize for their episode of Cara’s podcast series, The Liverpool Scientific.

The Liverpool Scientific podcast series was started in October 2020 by Cara with the aim of interviewing scientists and engineers behind the cutting-edge STEM research at the University of Liverpool.

Episodes have covered a wide range of research topics over the 17 episodes so far, including infectious disease and climate change, particle physics and dark matter, using astrophysics to track endangered species, and how drugs affect people’s mental health.

In the prize-winning episode, Dr Laura Corner talks about her research into plasma-based acceleration at the University of Liverpool and the Cockcroft Institute. The conversation also covers Laura’s family tradition of studying physics, how plasma wakefield acceleration works, and how producing a hologram in labs led her into a lifelong career studying laser physics.

The Rutherford Communications Prize is awarded by the Institute of Physics to scientists who exemplify excellence in outreach to the general public through the communication of plasma physics. Cara and Dr Corner were also invited to give the Rutherford prize talk on 9 April at the 47th IoP Plasma Physics Conference.

Cara said: “It is an honour to receive this award with Laura, and it’s fantastic that The Liverpool Scientific has been recognised by the Institute of Physics as contributing to Plasma Physics research outreach. I’m incredibly excited for the next few years of TLS and hope to continue sharing the world-leading research happening at Liverpool to a wider audience.”

Cara is starting a PhD in September in the Materials Innovation Factory at the University of Liverpool, and will be launching a new series of the podcast in the autumn.